What Is Rice Sheath Rot: How To Recognize Rice Black Sheath Rot Symptoms 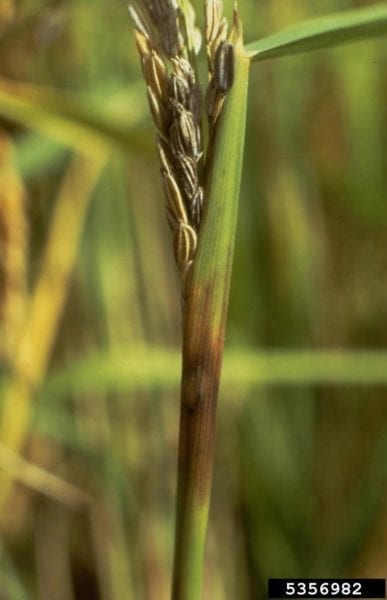 Rice is one of the most important crops in the world. It is one of the 10 most eaten crops, and in certain cultures, forms the basis for the entire diet. So when rice has a disease, it is serious business. Such is the problem with sheath rot of rice. What is rice sheath rot? Keep reading for diagnostic info and advice on treating rice sheath rot in the garden.

What is Rice Sheath Rot?

Rice is actually a member of the grass family and its arrangement is very similar. For instance, the sheath, which is a lower leaf that wraps around the stem, is much the same as any other grass plant. Rice with sheath rot will have that tubular, clasping leaf turn brownish black. This clasping leaf enshrouds the budding flowers (panicles) and future seeds, making the disease damaging where the sheath dies or infects the panicles.

The sheath is marked by reddish-brown lesions or sometimes brownish tan irregular spots on the enfolded sheath. As the disease progresses, darker dots form inside the spots. If you pulled off the sheath, white frost-like mold would be found in the interior. The panicle itself will be malformed with a twisted stem. The florets are discolored and the resulting kernels are lightweight and damaged.

In severe sheath rot of rice infections, the panicle will not even emerge. Rice with sheath rot diminishes its yield and can be infectious to uninfected crops.

Rice black sheath rot is a fungal disease. It is caused by Sarocladium oryzae. This is primarily a seed-borne disease. The fungus will also survive on remaining crop residue. It flourishes in overly crowded cropping situations and in plants that have damage that allows for entry of the fungus. Plants that have other disease, such as viral infections, are at greater risk.

Rice with sheath rot fungus is most prevalent during periods of wet weather and in temperatures of 68 to 82 degrees F (20-28 C). The disease is most common late in the season and causes reduced yield and malformed plants and grain.

An application of potassium, calcium sulfate or zinc fertilizer has been shown to strengthen the sheath and avoid much of the damage. Certain bacteria, such as Rhizobacteria, are toxic to the fungus and can suppress disease symptoms.

Crop rotation, disking and maintaining a clean field are all effective measures to prevent damage from the fungus. Removal of weed hosts in the grass family can help reduce the incidence of rice sheath rot.

Chemical fungicide applications of copper twice every other week has been shown to be effective in very infected crops. Pre-treating seed with Mancozeb prior to planting is a common reduction strategy.