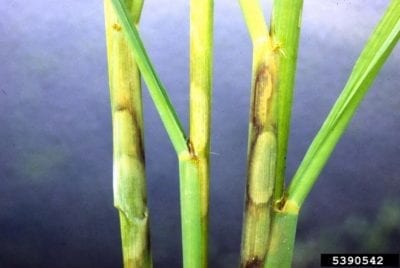 What is Rice Sheath Blight?

When your rice crop looks diseased, the odds are good that you have rice with the fungal disease called rice sheath blight. What is rice sheath blight? It is the most destructive disease of rice in many states.

This blight doesn’t only affect rice. Other crops can be hosts of this sheath blight as well. These include soybean, bean, sorghum, corn, sugarcane, turfgrass, and certain grass weeds. The destructive pathogen is Rhizoctonia solani.

What are the Symptoms of Rice with Sheath Blight?

The early symptoms of sheath blight include oval circles on leaves just above the waterline. They are usually pale, beige to pale green, with a darker border. Look for these lesions at the junction of the rice plant leaf and the sheath. The lesions can join together as the disease progresses, moving up the plant.

As previously mentioned, the disease is caused by a fungus, Rhizoctonia solani. The fungus is soilborne and overwinters year to year in the soil taking the form of a hard, weather-resistant structure called a sclerotium. A sclerotium floats on rice flood water and the fungus infects other rice plant sheaths it contacts.

Damage from rice sheath blight varies. It ranges from minimal leaf infection to grain infection to plant death. Both the amount of grain and its quality are reduced as the blight infection prevents water and nutrients from moving to the grain.

How Do You Treat Rice with Sheath Blight?

Printer Friendly Version
Read more about Rice
<Previous
Did you find this helpful? Share it with your friends!
FacebookTweetPinEmail
Related Articles
Newest Articles
You might also like…
Additional Help & Information