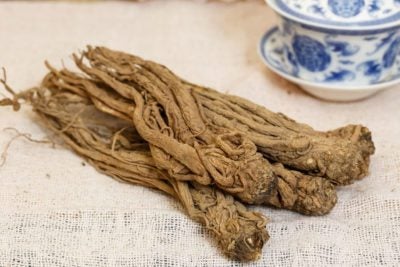 What is dong quai? Also known as Chinese angelica, dong quai (Angelica sinensis) belongs to the same botanical family that includes veggies and herbs such as celery, carrots, dill, and parsley. Native to China, Japan, and Korea, dong quai herbs are recognizable during the summer months by the umbrella-like clusters of small, sweet-smelling flowers that are highly attractive to bees and other beneficial insects – similar to garden angelica. Read on for more interesting information on Chinese angelica plants, including uses for this ancient herb.

Although Chinese angelica plants are attractive and aromatic, they are grown primarily for the roots, which are dug in fall and winter, and then dried for later use. Dong quai herbs have been used medicinally for thousands of years, and they are still in wide use today, primarily as capsules, powders, tablets, and tinctures.

Traditionally, dong quai herbs have been used to treat female ailments such as irregular menstrual cycles and cramps, as well as hot flashes and other symptoms of menopause. Research is mixed regarding the efficacy of dong quai for female ailments. However, many experts recommend that the herb shouldn’t be used during pregnancy, as it may cause uterine contractions, thus possibly increasing the risk of miscarriage.

Additionally, boiled dong quai root has traditionally been used as a blood tonic. Again, research is mixed, but it isn’t a good idea to use dong quai herbs within two weeks prior to elective surgery, as it may work as a blood thinner.

In addition to its medicinal qualities, the roots can also be added to stews and soups, much like sweet potatoes. The leaves, which have a flavor similar to celery, are also edible, as are the stems, which are reminiscent of licorice.

Dong quai grows in nearly any moist, well-drained soil. It prefers full sun or partial shade, and is often grown in semi-shady spots or woodland gardens. Dong quai is hardy in zones 5-9.

Plant dong quai angelica seeds directly in the garden in spring or fall. Plant the seeds in a permanent location, as the plant has extremely long taproots that make transplantation very difficult.

Printer Friendly Version
Read more about Angelica
<Previous
Did you find this helpful? Share it with your friends!
FacebookTweetPinEmail
Related Articles
Newest Articles
You might also like…
Additional Help & Information