Is Chicory An Annual Or Perennial: Learn About Chicory Lifespan In Gardens 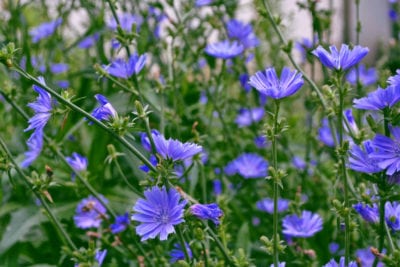 The chicory plant belongs in the daisy family and is closely related to dandelions. It has a deep taproot, which is the source of a coffee substitute popular in many regions. How long does chicory live? As with any plant, its lifespan depends upon site, weather, animal, and insect intervention, and many other factors. The way growers treat the plant may be an indication of the chicory lifespan in commercial settings.

Plant lifespan is often a subject of debate. This is because not only do natural and man-made conditions affect the plant’s duration of life, but also its usefulness. For instance, many annuals in the north are actually perennials or biennials in the south. So, is chicory an annual or perennial? Continue reading to see which… or if there is a third, unexpected choice.

Chicory is native to Europe and likely brought to North America by settlers. During World War II, coffee was scarce and the herb’s roots were used as a substitute. It is still in use today, especially in New Orleans, whose French influence has kept it on the menu. The harvested root is the part made into a coffee substitute, and the act will inevitably kill most plants.

But how long does chicory live without human intervention? The experts say it can live 3 to 7 years. That makes it a short-lived perennial. In harvest situations, roots are taken in fall and that is the end of the plant. Occasionally, some part of the root is left behind and the plant will re-sprout in fall. If this happens, it can be harvested anew.

Is Chicory an Annual or Perennial?

In commercial settings, the plants are carefully harvested two times. The reason for the number two is because when roots become any older, they are extremely bitter. That makes for an unpleasant drink. Because of this, growers treat them as biennial chicory plants.

Once it is too old, the plant is scrapped and new plants are installed. Here is where we have a twist. There is another type of chicory, Cichorium foliosum. This variety is actually grown for its leaves, which are used in salads. It is an annual to biennial plant. Cichorium intybus is the variety most often grown for its roots and the long-lived type of chicory.

So, you see, it depends which type of chicory we are speaking of and what its purpose might be. Technically, the root variety is a perennial, but because of the pungency of the root over time, it is rarely harvested after the plant is 2 years old. And the annual salad version may be grown into its second year in order to harvest the tasty and medicinal flowers, but after that the plant dies.

Chicory has a multitude of purposes besides culinary. Both annual and perennial plants have healing properties, provide important animal forage, and have topical and internal medicinal benefits.