Different Types Of Chicory: What Are Chicory, Endive, And Escarole 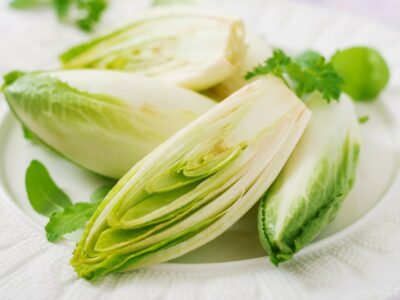 Sometimes food names can be misleading. Say, for instance, you have a recipe calling for chicory endive. Do you need the coffee additive or salad greens? Obviously, choosing the wrong one would make a big difference in the outcome of the dish. To avoid these problems, let’s clarify the confusion between chicory vs. endive.

What is Endive, Escarole, and Chicory

Perhaps you’ve seen endive, escarole, and chicory heads nestled among the leaf lettuce at your local grocery and wondered if these salad greens are a type of lettuce. While all these leafy greens are members of the aster family, lettuce belongs the Lactuca genus.

Endive, escarole, and chicory belong to the Cicorium genus and are types of chicory. Most types of chicory originated in the Mediterranean area and have been used as a food source for centuries. Chicory leaves are often used as salad greens and in cooking.

To distinguish among the types of chicory, let’s first address the difference between escarole vs. endive. The common name “endive” can refer to Cicorium endivia, a biennial species which is usually grown as an annual leafy salad green.

The species C. endivia is available in two leaf types, depending upon the variety. The loose leaf salad green with narrow, curly leaves is usually marketed as “endive,” “curly endive,” or “Frisee.” Broadleaf varieties are often referred to as “escarole,” “Batavian endive,” “grumolo,” or “scarola.”

Both types of C. endivia have mild to slightly-bitter tasting leaves that really add a punch to fresh lettuce-based salads. These leafy greens can also be used in cooked dishes. C. endivia plants form rosette-type heads which can become densely packed with leaves.

The term “chicory” is usually reserved for members of the Cichorium intybus species. Some varieties of C. intybus are grown for use as salad greens, others are harvested for their taproot. Confusion can arise when the C. intybus types of chicory are marketed as endive.

To help clarify the chicory-endive confusion, let’s explore the different varieties and subspecies of C. intybus:

With so many different names bouncing around, it’s easy to understand why the chicory-endive confusion exists. Rather than relying on marketing names, it’s advisable to distinguish the types of chicory by their physical appearance.

Printer Friendly Version
Read more about Chicory
<Previous
Did you find this helpful? Share it with your friends!
FacebookTweetPinEmail
Related Articles
Newest Articles
You might also like…
Additional Help & Information