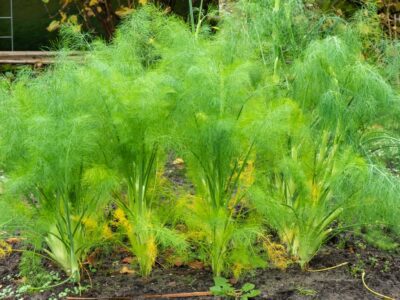 Fennel, grown for its anise flavored stalks, bulbous base and seeds, is fairly resistant to many common pests and diseases. However, even fennel plants can be plagued by problems. Read on for more.

Fennel (Foeniculum vulgare) is an herbaceous, short lived perennial plant in the carrot or Apiaceae family that is used for its licorice-like flavor. The dark green feathery foliage of fennel can rise to over 6 feet (2 m.) in height.

Hailing from the Mediterranean, fennel is usually grown as an annual, although some types are hardy in USDA zones 4-9. There are both common fennel and Florence fennel (var. azoricum), with the former looking much akin to dill and used for seed, and the latter grown for its thick stalks and bulbous base as well as its seeds.

Some of the more common fennel growing problems include weeds, bolting, pests, and diseases. Fennel has a tendency to bolt if stressed by a lack of irrigation and hot summer temps. Select a slow bolt variety such as ‘Cantino’ if you live in an area of high temperatures.

Aphids, cutworm, armyworm, and root knot nematode are pests that are attracted to fennel plants. There are many other beneficial insects such as bees, wasps, lacewings, butterflies and syrphid flies that are also attracted to fennel, so management of detrimental pests should be organic when possible.

Only severe infestations of aphids warrant control with insecticide. Usually applications of insecticidal soap or strong jets of water will control the aphid population sufficiently.

Cutworms will sever young seedlings at the soil line. To combat cutworms, remove all crop detritus from the soil at least 2 weeks prior to sowing. Use a plastic or foil collar fitted around the seedling stem and pushed down 3 inches (8 cm) into the soil to protect young plants. Hand pick larvae after dark and spread diatomaceous earth around the base of plants.

Armyworms can produce 3-5 generations in a year. The heavy feeding of the young larvae skeletonizes leaves leading to issues with photosynthesis. Use biological control by natural enemies and apply Bacillus thuringiensis.

The fennel pest root knot nematode results in galls produced on the plant’s root system which turn leaves yellow, reduce the vigor of the plant, and encourage wilting. To combat root knot nematodes, plant resistant varieties when available. Otherwise if nematodes are known to be present in the soil, solarize the soil to reduce the population as well as pathogens which may cause fennel disease.