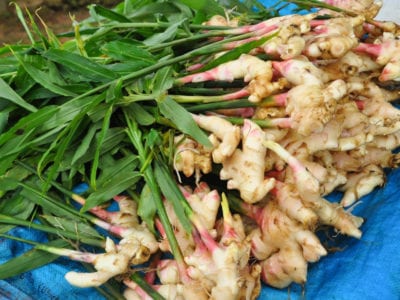 Ginger plants bring a double whammy to the garden. Not only can they produce magnificent flowers, but they also form an edible rhizome that’s often used in cooking and tea. Growing your own just makes sense if you have the space and the local climate to support it, but you should be aware of ginger plant diseases before you jump in. Many can be prevented by good growing conditions, but even if your stand is already established, it’s helpful to know what to look for in ginger disease symptoms and how to treat ginger disease.

Treating sick ginger plants starts with a proper identification of the pathogen involved. Ginger doesn’t have a lot of common problems, so that makes it a little easier to get a grip on any issue you may have. That being said, here are some diseases of ginger you’re likely to encounter in the garden:

Bacterial Wilt. Caused by a bacterium that enters the vascular tissue of ginger plants and multiplies until the shoots and leaves are unable to get enough water and nutrients to survive, bacterial wilt is evident by signs of water stress despite adequate watering and leaves yellowing from bottom to top. However, the plant can wilt so quickly that there is no time for discoloration, so this is not always diagnostic. Rhizomes will be water-soaked in appearance or have water-soaked areas and bacterial ooze. There is no practical treatment for home gardeners.

Fusarium Yellows. Fusarium is a fungus that invades ginger in much the same way that the bacterial colonies of bacterial wilt do. Since the fungus doesn’t grow as quickly, though, it takes longer for the ginger plant to wilt and begin to decline. You may instead find yellow and stunted shoots scattered among otherwise healthy plants. When you pull the rhizome, it won’t be water-soaked, but instead may have considerable dry rot. As with its bacterial counterpart, once you see signs of Fusarium yellows, the damage is already done.

Root-knot Nematode. Root-knot nematode may be familiar to vegetable growers, but in ginger it behaves slightly differently. Instead of creating a network of knobby growths, it gives rhizomes a somewhat lumpy, corked, or cracked appearance. You’re more likely to notice this after harvest, but unless it’s seriously infected, your plant may be otherwise healthy.

Most ginger plant diseases cannot be cured, only prevented, which is why it really matters how you plan and set up your ginger garden. Although it isn’t a solanaceous crop, don’t rotate ginger with tomatoes, peppers, eggplant, or tomatillo plants because they have some pathogens that may be able to cross over.

Raised beds are recommended, especially if you can solarize the soil well in advance of planting time. Most ginger pathogens are soil-borne, making it very hard to avoid exposure without starting with very sterile soil. Most importantly, however, is to keep ginger plants relatively dry, since bacteria and fungus require lots of moisture to thrive.

Printer Friendly Version
Read more about Ginger Plants
<PreviousNext>
Did you find this helpful? Share it with your friends!
FacebookTweetPinEmail
Related Articles
Newest Articles
You might also like…
Additional Help & Information