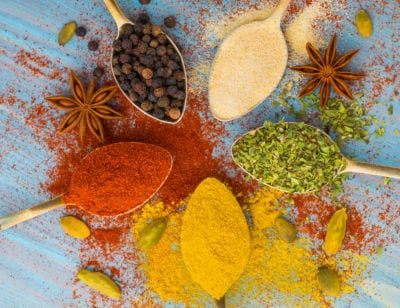 Herbs brighten and lend additional flavor to our food but sometimes the gourmet has had enough of the same old thing – parsley, sage, rosemary, and thyme. The true foodie wants to spread their wings and try something new. How about growing an Indian herb garden? Think of all the varied Indian herb plants and spices for Indian cooking. You too, can learn how to grow Indian herbs used in Indian food and let your culinary creative juices soar anew.

Some herbs used in Indian food, such as cilantro (coriander) and mint, are fairly commonplace in the herb garden. Others tend towards the exotic and, as such, require tropical climes, being more suited to USDA zone 10 gardeners or those with a greenhouse. Don’t let that stop you though, almost anyone can grow a rhizome of ginger inside in a pot on a windowsill.

That said, do some research when you decide which herb plants used for Indian cooking you want to grow. Some may be more suited to your area than others and, again, some may need some extra TLC, such as a greenhouse environment or may need to be grown as annuals only during the warmer months of the year.

How to Grow Indian Herbs and Spices

There are so many Indian herbs and spices; this cuisine might possibly take the cake for the sheer number of aromatics and flavorings used. So, you can start small and simple, such as with the cilantro and mint above, or go wild and try unusual combinations.

Take asafetida, for instance. Asafetida is basically a giant fennel that is native to Afghanistan. It is a lovely ornamental for the garden but beware of the stench. Asafetida actually means “stinking resin,” but don’t let that stop you from growing it. It is the key ingredient in many a dahl, Indian veggie dish, or batch of pickles.

Another common Indian herb is Ajwain (Carom). It can be grown as a hedge or ornamental specimen, just take care that its prodigious growth doesn’t overtake other plants. Ajwain is used for the lovely, edible ridged leaves, chopped into raita or salads, or chewed on to freshen breath.

Curry anyone? Yes, you can grow curry leaf if you live in zone 10 or above. Curry leaf is a small evergreen native to India and Sri Lanka. It bears small, dark blue, edible fruit but the fresh leaflets are the real treasure. They are toasted or fried until crisp and then ground and added to masalas. The tree needs full sun to part shade and moist, rich soil that is well-draining.

Cardamom is used as a spice in Indian cooking where it is known as the ‘Queen of spices.’ It is used in both savory and sweet dishes, being most especially included in garam masalas. It is native to India and cultivated there and in southeast Asia; both areas having extraordinary annual rainfall totals. Again, this plant is hardy to at least zone 10 and will thrive in the hot, humid south (of the U.S. or similar climates). Plant the rhizomes in fertile soil in part to full shade with consistent moisture. After three years, the plant will bear tall pink blooms that will eventually seed.

Fenugreek is a legume that can be sprouted and used in salads or sandwiches. Seeds will sprout in three to six days. This herb is cultivated in India for the hard, tiny seeds which are used to flavor pickles and in spice blends such as American curry powder.

The above herb plants are only a sampling of the many you can try growing in an Indian herb garden. There are literally dozens of choices that will add a little punch of the Indian palate to everything from ho-hum chicken salad, soups, and stews to meats and veggies – a bit of botanical Bollywood in your own backyard.