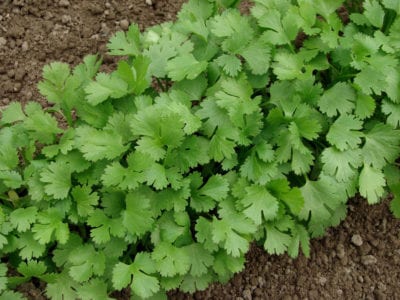 Cilantro (Coriandrum sativum) is used in a great many different dishes, particularly Mexican and Asian dishes. Despite the growing popularity for this dish in cooking, you don’t see cilantro growing in the home garden as much as you do other popular herbs. This may be due to the fact that many people think growing cilantro is difficult. This is not the case at all. If you follow these few tips for growing cilantro, you will find that you will be successfully growing cilantro in no time at all.

In cooking, cilantro seeds are called coriander. The “seeds” are actually two cilantro seeds encased in a husk. The husk is hard, round and is light brown or grey in color. Before you plant them in the ground, you need to prepare the cilantro seeds to increase the chances that they will germinate. Gently crush the seed husk holding the two seeds together. Soak the cilantro seeds in water for 24 to 48 hours. Remove from the water and allow to dry.

How to Plant Cilantro

Once you have prepared the cilantro seeds, you need to plant the seeds. You can either start cilantro indoors or outdoors. If you’re starting the seeds indoors, you’ll be transplanting cilantro to the outdoors later on.

Put the seeds in the soil and then cover them with about a 1/4-inch (6mm.) layer of soil. Leave the cilantro growing until it is at least 2 inches (5 cm.) tall. At this time, thin the plant to be about 3 to 4 inches (7.6 to 10 cm.) apart. You want to grow cilantro in crowded conditions because the leaves will shade the roots and help to keep the plant from bolting in hot weather.

If you’re transplanting cilantro into your garden, dig holes 3 to 4 inches (7.6 to 10 cm.) apart and place the plants in them. Water thoroughly after transplanting.

The most important thing to remember when growing cilantro is that it doesn’t like hot weather. Cilantro growing in soil that reaches 75 F. (24 C.) will bolt and go to seed. This means that the ideal cilantro growing conditions are cool but sunny. You should be growing cilantro where it will get early morning or late afternoon sun, but be shaded during the hottest part of the day.

Even with ideal cilantro growing conditions, this is a short lived herb. Taking the time to prune cilantro frequently will help delay bolting and prolong your harvest time, but no matter how much you prune cilantro, it will still eventually bolt. Plant new seeds about every six weeks to keep a steady supply throughout the growing season.

Cilantro will also reseed in many zones. Once the cilantro plant bolts, let it go to seed and it will grow again for you next year, or collect the cilantro seeds and use them as coriander in your cooking.

So as you can see, with just a few tips for growing cilantro you can have a steady supply of this tasty herb growing in your garden.

Printer Friendly Version
Read more about Cilantro / Coriander
Next>
Did you find this helpful? Share it with your friends!
FacebookTweetPinEmail
Related Articles
Newest Articles
You might also like…
Additional Help & Information