Potted Lovage Care: How To Grow Lovage In A Pot 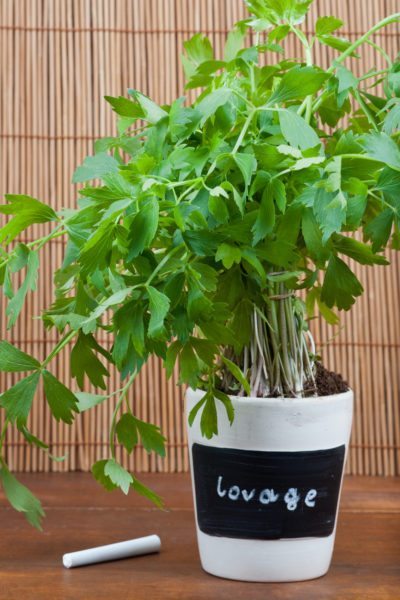 When you think about herbs, many instantly come to mind such as rosemary, thyme, and basil. Do you think lovage? Not so much. I don’t understand why, really. I mean, what’s not to love about lovage? Yes, it was beloved in medieval times, but there’s nothing medieval about it! The roots, seeds, and leaves are all edible. The leaves have a strong celery taste and, when used in moderation, give you some great culinary options in soups, stews, salad dressings, and more in their fresh or dried form. It’s even easier to grow than celery.

Lovage is not easily found at your grocery store in the fresh herb section or the spice rack, which makes it a worthwhile venture in the garden. The stalk of this aromatic herb can even be used as a straw in your favorite cocktail – I’ve heard that a pairing with Bloody Mary is pretty awesome. These all sound like great reasons to grow lovage, especially that last one. Let’s try it, shall we?!

So how can you grow lovage in pots? It turns out that growing lovage in a container is relatively easy. This herb, which looks similar to parsley, is a tough long-lived perennial. Hardy to zone 3, potted lovage plants require a large, deep, well-draining pot, at least 12 inches (31 cm.) wide and 10 inches (25 cm.) deep, due to the development of a rather large, vigorous root system.

Lovage can be grown from seed or plants but growing from plants is said to be much easier. If you do decide to go the seed route, then here are some seed sowing tips.

Seeds sown should be ¼ inch (6 mm.) deep with germination expected in 10 to 20 days. Fresh seeds are recommended for better germination rates. The cultivation of seed sown lovage typically starts happening in the second growing season, as it takes a complete summer or nearly a year for the plant to reach a good usable size.

A rich, well-draining, sandy loam soil is most ideal for potted lovage plants, and the container should be placed in a location that receives full sun or partial shade. Keep the soil in the container consistently moist – do not overwater and try not to let it dry out during its growing season. Feed container grown lovage monthly with an all-purpose liquid fertilizer.

Lovage can grow several feet (1 m.) tall. When growing lovage in a container, I would not foresee it reaching the same height as an inground planting (which is up to 6 feet (2 m.)); however, it will probably still be a sizeable plant if you let it be. For container grown lovage, you may want to contain the height and encourage a bushy growth pattern by keeping it well clipped, harvesting your lovage frequently, and being sure to cut off the flower stalks as they appear.

Cutting the flower stalks as directed will also keep the lovage leaves from getting too bitter. However, if you’re into lovage for purely aesthetic reasons versus culinary, then you would be interested to know that the flowers are chartreuse (greenish yellow). The flower stalk will eventually produce huge heads of seeds which, if you’re interested in harvesting viable seeds, should be left on the lovage plant until the seed stalk has ripened and turned brown, then collected and further dried in a warm ventilated location.

By late autumn you will observe die back in the plant’s stems, which means the lovage is going dormant for the winter. Cut the dead stems off and store the pot in a protected, cool place, such as a basement or garage, until spring.

Repot with fresh soil in the spring, resume watering and fertilizing, and soon it will re-sprout and you will once again be blessed with fresh leaves. To keep the plant vigorous and to contain its size, you will want to divide the root ball every three to four years.