Lovage Pest Management – How To Treat Common Pests Of Lovage 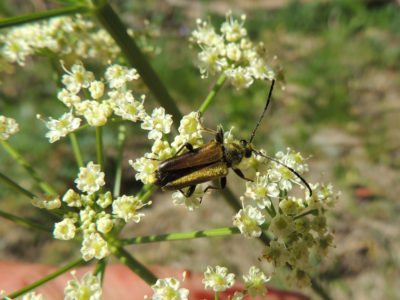 Lovage is a hardy perennial herb that is native to Europe but naturalized throughout North America too. Popular especially in southern European cooking, its leaves taste a bit like parsley with sharper hints of anise. It is often eaten in salads or as seasoning in broths. It’s a must for any kitchen herb garden. Due to its usefulness, it is especially upsetting to find it infested with pests – leaves are so much more pleasant to eat when they’re not covered in bugs! Keep reading to learn more about bugs that eat lovage and tips for lovage pest management.

There are a few insect pests that are known to attack lovage. The tarnished plant bug, leaf miner, and celery worm are just a few of the bugs that eat lovage. These bugs should be able to be removed by hand picking or the strong blast of a hose. If a part of a plant is particularly infested, remove and dispose of it.

It is not uncommon to see ants on lovage plants too. These ants aren’t actually harmful to the plants, but their presence is the sign of another problem. Ants like aphids – they actually farm them so they can harvest their excrement, called honeydew. If see ants on your lovage, this probably means that you have aphids, which are attracted to the plant’s sticky juices. Aphids can usually be removed with a strong spray from a hose. Neem oil is also effective.

Moles and voles are known to burrow under lovage plants to eat their roots.

Not all pests of lovage plants are truly pests. Lovage flowers attract small parasitic wasps. These wasps lay their eggs inside other bugs – when the egg hatches, the larva eats its way out through its host. It is because of this, having flowering lovage in your garden is actually good for deterring pests that might bother other plants.