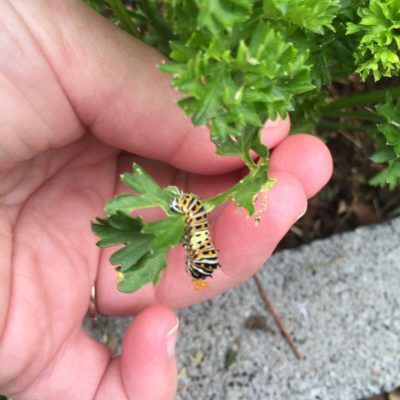 Would it surprise you to learn that the worms on celery plants are caterpillars of the black swallowtail butterfly? Gardeners often feel more regret about dispatching butterfly caterpillars than they would about exterminating stinkbugs or garden spiders. In this article, you’ll find out how to handle these interesting creatures in the garden.

What are Celery Worms?

Larvae of the eastern black swallowtail (Papillo polyxenes asterius) are sometimes seen in the vegetable garden where they munch celery, parsnips, and carrots. You might also see them in the herb garden where they eat dill, parsley, and fennel. Their appearance changes depending on their life stage. Young celery worms might resemble bird droppings. As they age, they develop dark and light stripes punctuated by bright yellow spots.

One of their most astonishing features is a bright orange osmeterium, which resembles a pair of horns or antennae. They keep the structure tucked away behind the head but can bring it out into the open when they feel threatened. At the same time, they release an unpleasant odor. If this isn’t enough to warn off predators, they can throw pellets of feces with their mandible.

Controlling Worms on Celery or Leave as Host Plant?

Finding these “worms” eating celery presents gardeners with a dilemma. Should you leave them be and risk losing your crop, or should you exterminate them? One thing that might set your mind at ease is that, while many species of butterflies are in danger of extinction, eastern black swallowtails are secure. Killing a few caterpillars in the garden won’t set the species back.

On the other hand, caterpillars on celery plants may not indicate a serious problem. Eastern swallowtails don’t congregate in large numbers like some butterflies, so you may only find a few larval worms on celery. Why not watch them closely to see if they do any real damage?

Whether they choose celery as a host plant or one of the other members of the carrot family, the control is the same. If there are only a few, you can handpick them. Wear gloves and drop the caterpillars into a jar of soapy water to kill them.

If you find handpicking particularly distasteful, you can spray them with Bt (Bacillus thuringiensis), which kills caterpillars by making it impossible for them to digest food. It takes a few days for the caterpillars to die, but they won’t feed on your plants anymore. This method is best used on young caterpillars. Try using neem spray on older caterpillars.