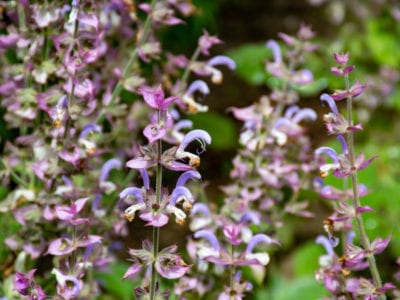 Clary sage plant (Salvia sclarea) has a history of use as a medicinal, flavoring agent, and aromatic. The plant is an herb in the genus Salvia which encompasses all the sages. Salvia sclarea is primarily grown in the temperate areas of the world and is a short-lived herbaceous perennial or biennial. More commonly known as Cleareye or Eye bright, clary sage herb is easy to grow and adds an ornamental display of flowers to the herb garden.

Clary sage plant is native to the Mediterranean and parts of Europe. It is most commonly cultivated in Hungary, France, and Russia. Both the leaves and flowers are used in flavoring and teas as well as aromatherapy applications.

The plant also yields an essential oil called clary oil or muscatel sage, which is used for topical afflictions and in aromatherapy applications.

Growing clary sage for home use provides all these benefits and is safe for human consumption according to the Purdue University.

How to Grow Clary Sage

Clary sage is a biennial that begins as a rosette in the first year and will grow a flower stalk the second year. It is a short-lived plant that will usually die after the second year, although in some climates it may persist weakly for one or two more seasons. The plant can grow up to 4 feet (1 m.) tall and produces purplish blue flower spikes from late spring into midsummer. Flowers are held in panicles which contain four to six blooms. Cultivators grow clary sage primarily for the flowers, which are dried or pressed for various uses.

Growing clary sage can be accomplished down to USDA Plant Hardiness Zone 5. Clary sage plant grows and establishes quickly in full sun and well drained soils. Sage can be started from seed, cuttings, or layered. The most important attribute for growing clary sage is drainage. Wet sites can rot the plant or severely curtail its growth. The plant will need supplemental irrigation until it is established but can provide its own moisture thereafter except in very arid zones.

Using Clary Sage in the Garden

Clary sage is deer resistant, which makes it ideal for the naturalized or meadow garden. The plant may spread by seed but volunteer seeding is usually minimal. The herb requires a chilling period of at least three months to produce flowers and is not a good performer in hot climates for this reason. Clary sage plant does well in an herb or pottage garden or mixed in a border of perennials. It attracts honeybees and other pollinators to the garden.

Clary sage has two common cultivars. A variation called turkestanica is a 3 foot (1 m.) tall version of the herb with longer flower bracts and a more pronounced blue color. The cultivar ‘Vatican’ is a white flowering clary sage herb with the same cultivation requirements as the parent herb.

Printer Friendly Version
Read more about Sage
<PreviousNext>
Did you find this helpful? Share it with your friends!
FacebookTweetPinEmail
Related Articles
Newest Articles
You might also like…
Additional Help & Information