Wormwood As A Companion – Plants That Grow Well With Wormwood 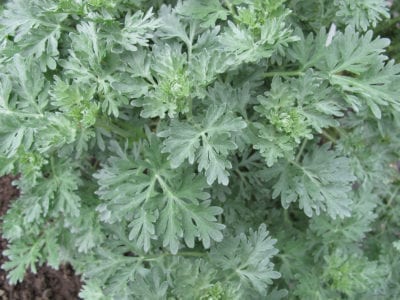 Companion planting is a time-honored practice that provides for plants that complement each other in different ways. They may prevent certain pests, provide support, or even attract pollinators, increasing yields. Using wormwood as a companion can prevent many nuisance insects. There are many good wormwood companion plants. However, there are a few that should not partner with this herb.

Learn what can and what shouldn’t be planted with wormwood here.

Wormwood is an herb which is most noted for providing the classic flavor of vermouth. Its silvery gray leaves make an impressive impact against green foliage and bright flowers. The plant contains absinthin, which was once used to make a beverage by a similar name. There are many plants that grow well with wormwood but it should be avoided in the edible garden and among certain herbs.

Wormwood’s natural harsh taste and strong odor tend to repel certain insect pests. It will also turn off nibbling pests such as deer, rabbits, and other animals. Using wormwood as a companion can repel fleas and flies as well as certain in ground larvae. Even moths will turn away from the plant, which prevents them from laying their eggs in susceptible plants.

Other pests that avoid the plant are ants, slugs, snails, and even mice. The strong chemicals in the plant emit when it is crushed but can also wash into the soil with rain or irrigation.

While using wormwood for pests is an excellent nontoxic, natural pest repellent, caution should be used. It is extremely poisonous in its raw state and seems to be attractive to dogs. Plant it away from pets and children.

Many gardeners want to know, “Does wormwood inhibit growth?” It actually does. Many species of plants grow more slowly or stop altogether due to the chemical compounds of the plant. Its ability to inhibit growth might be useful if you have a field of weeds, but it is best to plant it well away from other plants. It is especially bad to use around:

Plants That Grow Well With Wormwood

While the flavor can seep into vegetables and herbs, the wormwood plant is an excellent companion in ornamental beds. Use it in the annual or perennial bed. Its silvery leaves set off many plants and its easy-care nature makes it a natural in a rockery or even drought garden.

If you want to harness its pest repellent properties for the vegetable garden, plant it in containers. It is especially useful around carrots (repels carrot fleas), onions, leeks, sage, and rosemary. You can also make a wormwood tea to spray on ornamental plants as a natural pesticide but avoid using it on edible plants.