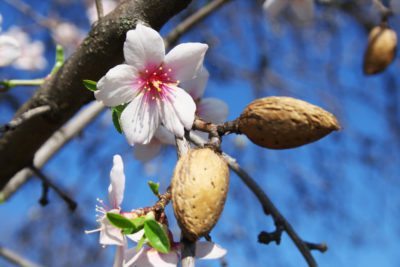 Almonds are not only delicious but nutritious, so many folks are trying their hand at growing their own nuts. Unfortunately, humans aren’t the only ones that enjoy almonds; there are lots of bugs that eat almonds or the tree’s foliage. When treating pests on almond trees, it’s important to recognize almond tree pest symptoms. The following article contains information on almond tree insects and almond pest treatments.

There are quite a few bugs that eat almonds, or rather more commonly the tree’s foliage. Ants, specifically southern fire ants and pavement ants, love almonds as much as you do. Large colonies of these can decimate a nut harvest but are not usually a huge problem.

Aphids and scales, tiny sap sucking vampires, feed in colonies and cause yellow leaf spots and deformity in leaves and flowers. The presence of either of these insects leads to a higher incidence of ants. Why? These insects exude honeydew upon which sooty mold grows, but it also attracts ants. The ants, in return for the honeydew, act as protectors from predatory insects to the scales and aphids.

To rid the tree of scales and aphids, try a hard spray from the garden hose to dislodge them. Prune out and destroy areas of heavy infestation and spray the tree with an insecticidal soap or horticultural oil.

Tent caterpillars feed from April to June, skeletonizing foliage. When there are only a few of these on the tree, treating these pests on almond trees simply requires handpicking and disposing of them. For larger infestations, prune out heavily infested twigs and branches and destroy them. An insecticide might be necessary in the case of large numbers of tent caterpillars.

Leafroller larvae have green bodies with black heads. They feed on almond tree buds just as they are opening. Usually, the population of leafrollers is small and can be left alone, but if there is a large population, Bacillus thuringiensis is often helpful.

Several types of borers may afflict an almond tree. All of them tunnel through the outer layer of bark and into the cambia, or inner wood. Borers are difficult to treat since they are beneath a layer of bark. If the tree is healthy, it will likely not incur any lasting damage from the borers. Heavy infestations may need to be controlled with pesticides. This depends on the type of borer your tree has, so check with your local extension office for information on identifying the borers and insecticide referrals.

Pacific, two-spotted, or strawberry spider mites are very tiny insects that spin minute webs. They also suck on the leaves of the tree, resulting in yellowing and premature leaf drop. Spider mites thrive in dry, dusty conditions. To thwart spider mites, keep the tree consistently watered and the surrounding area damp. Also, wash the spider mites off the foliage. For heavy infestations, use an insecticidal soap of horticultural oil during the dormant season.

Leaf footed bugs wear camouflage, leaf-like spurs on their hind legs to protect from predators. Like the almond loving ants, leaf footed bugs also feed on the nuts of the tree as they develop. This can kill the developing seed. They also lay their eggs inside the nut hull which in turn develop abnormally. Leaf footed bugs are most active in early spring but don’t usually infiltrate almond trees. If they do, an application of insecticide might be in order. Even so, this may not kill the eggs residing inside the nut and they may continue to drop from the tree for up to a week post application.

For the most part, almonds are resilient and partially pest resistant. Even the insects listed above have fairly minor almond tree pest symptoms and almond pest treatments are usually of the more benign variety, such as a steady stream of water or the application of horticultural oil or insecticidal soap.