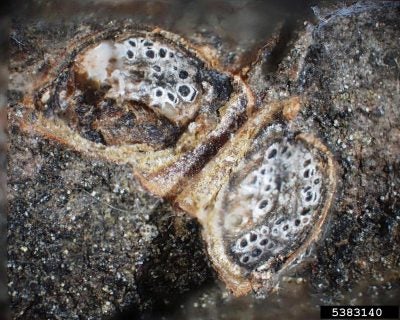 What is Eastern Filbert Blight?

Caused by the fungus Anisogramma anomala, Eastern filbert blight is a disease that makes growing European filberts outside of Oregon very trying. The small, spindle-shaped cankers become larger every year, eventually growing all the way around a branch to prevent the flow of sap. Once this happens, the stem dies.

Tiny, black fruiting bodies grow inside the cankers. These fruiting bodies contain spores that spread the disease from one part of the tree to another, or from tree to tree. Unlike many fungal diseases, Eastern filbert blight doesn’t depend on a wound to provide an entry point, and it can take hold in almost any climate. Since the disease is widespread in North America, you will probably find it less frustrating and more enjoyable to grow other types of nuts.

How to Treat Eastern Filbert Blight

Horticulturists have long known that the fungal disease that creates a minor annoyance on American hazelnut trees can kill the Eastern hazelnut. Hybridizers have tried to create a hybrid with the superior quality of the European hazelnut and the disease resistance of the American hazelnut, but so far without success. As a result, growing hazelnuts may be impractical in the U.S. except in a small area of the Pacific Northwest.

Treating Eastern filbert blight is difficult and expensive, and only meets with limited success. The disease leaves small, football-shaped stromata on the tree’s twigs and branches, and the little cankers may not appear until a year or two after infection. By the time they are obvious enough that you can prune them out, the disease has already spread to other parts of the tree. This, combined with the fact that there is currently no fungicide to help with Eastern filbert blight management, means that most trees die in three to five years.

Treatment relies on early detection and pruning to remove the source of infection. Check the branches and twigs for the distinctive, elliptical cankers. Your Cooperative Extension agent can help if you have trouble identifying them. Watch for twig dieback and leaf loss in mid to late summer.

The disease may exist 3 feet (1 m.) or more further up the branch, so you should prune away infected twigs and branches well beyond the evidence of disease. Remove all infected material in this way, making sure to disinfect your pruning tools with 10 percent bleach solution or household disinfectant each time you move to another part of the tree.

Printer Friendly Version
Read more about Hazelnut
<Previous
Did you find this helpful? Share it with your friends!
FacebookTweetPinEmail
Related Articles
Newest Articles
You might also like…
Additional Help & Information