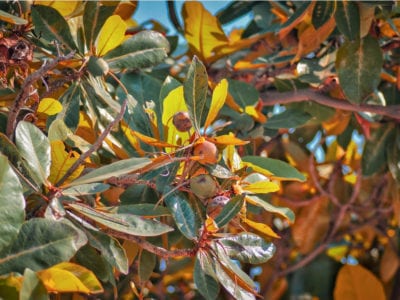 Indian almond trees are very attractive, heat-loving trees that only thrive in U.S. Department of Agriculture plant hardiness zones 10 and 11. That may be traced back to their origins in tropical Asia. Indian almond cultivation generally occurs in tropical and subtropical regions in North and South America. They naturalize easily and are considered invasive in some regions.

If you are considering growing an Indian almond, you’ll need to know the size and shape of the tree usually reaches some 50 feet (15 m.) tall but can grow considerably taller. The tree’s branching habit is interesting, growing horizontally on a single, erect trunk. The branches divide repeatedly into tiered whorls that grow some 3 to 6 feet (1-2 m.) apart.

The bark of Indian almond trees is dark, a gray or grayish brown. It is smooth and thin, cracking as it ages. Mature trees have flattened, dense crowns.

How to Grow Tropical Almond

If you live in a warm zone and are thinking about growing an Indian almond tree, you’ll be interested to learn that it is more than an ornamental. It also produces juicy, edible fruit. To get this fruit, the tree first needs to flower.

White blossoms appear on long slender racemes a few years after an almond tree is transplanted. Male and female flowers appear in early summer and develop into fruits late in the year. The fruits are drupes with a slight wing. As they mature, they turn from green to red, brown, or yellow. The edible nut is said to taste similar to that of an almond, hence the name.

You’ll find that tropical almond care is minimal if you plant the tree correctly. Site the young tree in a full sun location. It accepts almost any soil as long as it well draining. The tree is drought tolerant. It also tolerates salt in the air and often grows close to the ocean.

What about pests? Dealing with pests is not a big part of tropical almond care. The tree’s long-term health is usually not affected by pests.