Artichoke Plant Propagation – How To Propagate An Artichoke 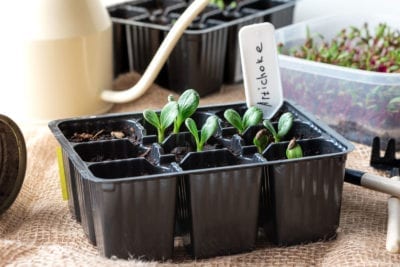 Artichoke (Cynara cardunculus) has a rich culinary history that dates back several centuries to the time of ancient Romans. The propagation of artichoke plants is believed to have originated in the Mediterranean area where this perennial thistle was considered a delicacy.

How to Propagate an Artichoke

As a tender perennial, artichokes are winter hardy in USDA zones 7 through 11. Modern-day gardeners wishing to cultivate artichokes in other climates can do so by planting artichoke from seeds and growing them as annuals. Rooting artichoke cuttings is another method of artichoke plant propagation and is used in areas where they can be grown as perennials.

When growing artichokes as an annual crop in cooler climates, it’s best to start the seeds indoors approximately two months before the last frost date. It was long believed artichokes grown from seed were inferior to those propagated by rooting cuttings. This is no longer the case. Follow these tips for successfully planting artichokes from seeds:

Planting artichokes from seeds can also be used to establish perennial beds in areas where they are winter hardy. Artichokes reach peak production in their second year and continue to produce for up to six years. Mature plants will send up one or more offshoots which is an alternative method of artichoke plant propagation:

Harvest artichokes when the lowest bract on the bud begins to open. In warmer climates with a longer season, harvesting two crops per year is possible.