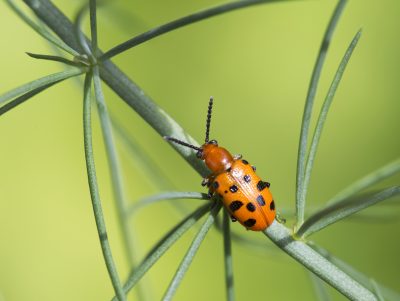 The spotted asparagus beetle lifecycle is such that the larvae emerge just in time to eat the asparagus berries, long after the asparagus has passed its prime harvesting stage. Unless you’re growing asparagus to collect the seed, this shouldn’t be a problem.

How to Get Rid of Spotted Asparagus Beetles

One very easy and pretty effective method is hand removal. If you have a small asparagus patch, simply pick off the individual bugs and drop them in a bucket of soapy water. You might have a mix of adult beetles and larvae.

Another good and very effective method is planting only male plants– these won’t form berries and should not attract spotted asparagus beetles.