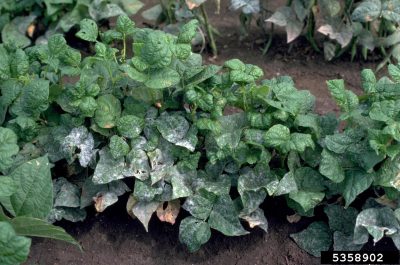 If you grow roses, you are likely familiar with the powdery white fungus that attacks plant leaves, blooms, and stems. This powdery mildew attacks many types of plants, including beans. Not only is the stuff unsightly, but it can ruin your crop, diminishing your harvest. However, powdery mildew on bean plants can be controlled and you can even prevent it. If you see even the first sign of bean plants with powdery mildew, it is time to jump into action and take steps to keep the fungal disease from spreading.

Powdery mildew stems from the funguses Erysiphe or Sphaerotheca. It actually doesn’t matter which fungus is causing the damage when your crop is at stake. Treating powdery mildew on beans from either fungus requires the same method. Early control is essential, as the fungus spreads rapidly in warm, moist conditions and can quite literally decimate your bean crop, so recognizing powdery mildew on beans can protect your crop and prevent the spread of this fungal issue throughout your other vegetables.

Powdery mildew in beans is such a common occurrence it should have its own trademarked name. This fungus produces fruiting bodies in warm, moist conditions which spread across all parts of the plant and appear as ashy white powder.

Most powdery mildew occurs on legumes and cucurbits in the crop category, although they affect citrus and other crops as well. Once the spores are present and the right conditions occur, the fungus spreads rapidly in epidemic proportions. Preventing powdery mildew in beans is a crucial step to keeping an abundant harvest.

How to Control Powdery Mildew on Beans

It is tricky treating powdery mildew on beans and other edible crops. This is because many of the products labeled for such control are not suitable for edible plants. Diluted compost tea (by 4 parts water) may offer some control without any toxicity.

If you have plants that develop powdery mildew habitually, apply a preventive fungicide early in the plant’s development. That means prior to flowers and fruit. Avoid eradicant fungicides, which will kill existing diseases but can contaminate fruit. Apply sulfur early in the season to protect plants from infection.

For existing infection, use a horticultural oil that is natural such as neem oil or jojoba. Finally, there are a couple biological controls in the form of beneficial microorganisms that combat powdery mildew. Look for products with Bacillus subtilus, the unique, non-toxic organism that prevents powdery mildew.