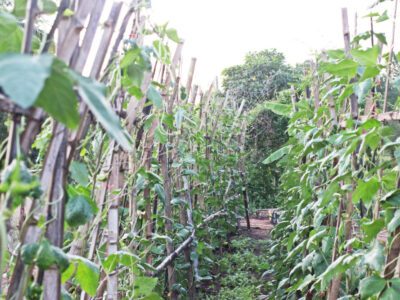 Brown pods, speckled leaves and reduced edible yield. What have you got? It may be a case of southern pea rust disease. Rust on southern peas is a common occurrence which hits both commercial and homegrown crops. If disease levels are high, complete defoliation and crop failure is possible. Luckily, many cultural controls are effective in preventing the disease, as are several other treatments.

Fresh cowpeas (black-eyed peas, southern peas) are a sweet, nutritious treat during the growing season. Along with the good sometimes comes the bad, and such is the case in southern pea vines.

Rust in cowpeas or southern peas is prevalent in many regions, not just the South. It occurs during periods of warm, moist weather. There are not any listed resistant varieties yet, but scientists have isolated the genetic marker that bears resistance and new cultivars are sure to be on the way soon. In the meantime, prevention and management are key ingredients in how to treat southern pea rust.

Rust on southern peas first appears as yellowing and wilting on lower leaves. The disease progresses and affects the upper leaves. The stems bear small reddish brown pustules and may have white hyphae displayed. Few pods are produced, but what does grow has brown spots and may show signs of spore. Seeds are deformed and germination is compromised.

Cowpeas with rust die within a few days of showing symptoms of the disease. There are several hosts for the disease in the legume family, both wild and cultivated. The cause is the fungus Uromyces appendiculatus. If you open up a stem, you will see that the vascular system is tinted brown just above the soil line. The mycelia of the fungus form fan-like patterns at the soil line.

The fungus survives over winter in infected plant debris or even support structures. Seed or transplants may also be infected. The fungus multiplies rapidly when temperatures are warm but persistent rains or humidity are present. It can affect seedlings at first leaf or mature plants that are already bearing. Crowded seedlings and lack of air flow also contribute to development of the disease as does overhead watering.

Removing debris, thinning seedlings, weeding and 4- to 5-year crop rotations can have some beneficial effect. The disease can even travel on boots, clothes, and infected tools. Sterilizing and practicing good hygienic practices may help prevent or minimize occurrences of southern pea rust disease.

How to Treat Southern Pea Rust

Seeds can be treated prior to planting with a fungicide like mancozeb before planting. Other controls, such as chlorothalonil, are sprayed directly on the leaves and stems before bud emergence. If using chlorothalonil, wait 7 days before harvesting. Sulfur is also an effective foliar spray. Spray chlorothalonil every 7 days and sulfur at 10 to 14 day intervals.

The best treatment is prevention. Remove plant debris or dig it deeply into soil at least 6 weeks before planting cowpeas. If possible, source disease free seeds and do not use seed from infected fields. Remove any plants in the field at the first sign of disease and spray the remaining crop immediately.