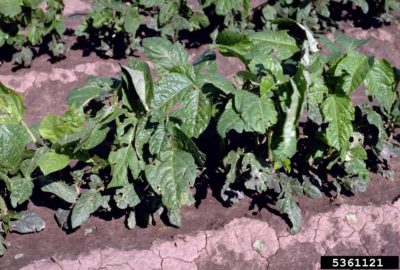 Southern peas, or cowpeas, are also sometimes referred to as black-eyed peas or crowder peas. Widely grown and originating in Africa, southern peas are also grown in Latin America, Southeast Asia, and throughout the southern United States. With cultivation comes an increase in the incidence of southern peas with wilt. What is southern pea wilt and what causes wilt in southern peas? Read on to learn more.

What Causes Wilt in Southern Peas?

Southern pea wilt is caused by the fungus Fusarium oxysporum. Symptoms of wilt of southern peas include stunted and wilted plants. Lower leaves turn yellow and prematurely drop from the plant.

Wilt of southern peas is exacerbated by cool and wet weather conditions. The best control of Fusarium wilt is the use of resistant varieties. If not used, practice root-knot nematode control, as the plants susceptibility is increased with nematode presence.

Also, avoid planting peas when soil temperatures and weather conditions are ideal for the fungus. Avoid deep cultivation around the plants which may injure roots, thus increasing the incidence of the disease.

Treat high quality seed with a fungicide specific to cowpeas and apply this fungicide in the furrow before sowing. Rotate non-host crops every 4-5 years. Control weeds around the planting site and immediately remove and destroy any virus infected debris or plants.