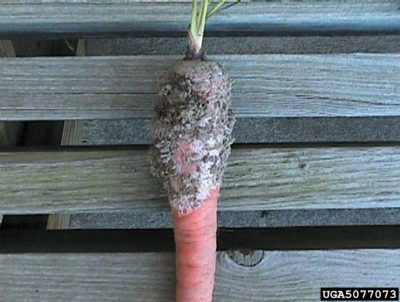 What is Southern Blight on Carrots?

Carrot southern blight is a fungus (Sclerotium rolfsii) that is associated with warm temperatures following heavy rains. While a fairly minor disease in the home garden, southern blight is a more major problem for commercial growers. This is because the fungus affects a diverse group of crops (over 500 species!), especially those grown in tropical to subtropical regions and survives for long periods in the soil.

Symptoms of Carrots with Southern Blight

This fungal disease is characterized by the soft, watery decay of the taproot near or at the soil line. The tops of the carrots wilt and may yellow as the disease progresses and mats of white mycelium grow on the root and soil surrounding the carrot. Small resting structures (sclerotia) develop on the mats of mycelium.

Wilting may be misdiagnosed as being caused by Fusarium or Verticullum; however, in the case of southern blight infection, the leaves usually remain green. Bacterial wilt may also be suspected, but unlike bacterial wilt, the tell-tale mat of mycelium around the carrot is a clear sign of S. rolfsii.

Once the fungus is apparent on the soil’s surface, the carrot has already rotted.

Southern blight is difficult to control since it does infect so many hosts and easily survives in the soil for lengthy periods of time. Crop rotation becomes part of an integrated method of controlling the disease.

Along with crop rotation, use disease free or resistant transplants and cultivars when southern blight has been diagnosed. Deeply plow under or destroy any diseased plants. Be aware that even when plowing under, the soil-borne pathogens may yet survive and create future outbreaks.

If the disease is severe, consider solarizing the area. Sclerotia can be destroyed in 4-6 hours at 122 F. (50 C.) and in only 3 hours at 131 F. (55 C.). Water and cover the infected area of soil with clear polyethylene sheeting during warm summer months to reduce the number of Sclerotia, and thus the incidence of southern blight.

Printer Friendly Version
Read more about Carrots
<PreviousNext>
Did you find this helpful? Share it with your friends!
FacebookTweetPinEmail
Related Articles
Newest Articles
You might also like…
Additional Help & Information