Common Smut Of Corn: What To Do For Corn Smut Fungus 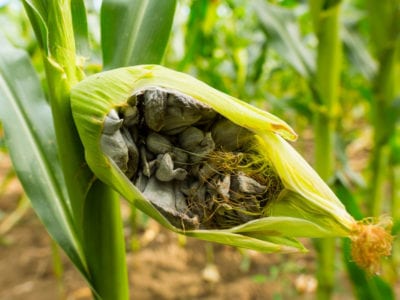 Everybody knows that the sweetest corn comes straight off the stalk, and that’s why so many home gardeners set a little spot aside for a few dozen ears of this golden vegetable. Unfortunately, if you grow corn, you may end up growing corn smut galls, too. Smut of corn is a very distinctive fungus that causes leaves, fruit, and silk to form large silvery or greenish galls. Up to 20 percent losses due to corn smut fungus have been recorded, but it’s still considered a minor corn disease — and even a delicacy in some places.

What is Corn Smut?

Corn smut is caused by a fungus called Ustilago zeae, which is commonly blown on the wind from an infected stand to an uninfected stand of corn. The spores can live up to three years, making them very hard to completely destroy. The fungus is generally considered an opportunistic fungus, only able to move into the tissues of your corn plants through damaged or torn tissues, but if they get a chance to infect, they waste no time.

Once the Ustilago zeae spores find an opening in your corn, it takes about 10 days for the galls to appear. These unsightly growths vary in size but can reach up to five inches (13 cm.) across, with the smaller galls appearing on leaf and silk tissues and the larger erupting from maturing ears.

Although this fungus wasn’t what you planted or even hoped for when you were thinking about growing corn, it’s considered a delicacy in and of itself, as long as you harvest the corn smut galls while they’re still young. In Mexico, they call it cuitlacoche and it’s used in cooking in a similar way as a white mushroom.

Corn smut control can be difficult, if not impossible, to eliminate, but you can at least minimize the exposure your corn gets to the fungus year after year. Always make sure to clean up all the corn debris in your patch as it falls, since it can harbor more corn smut spores. If you remove the galls while they’re still young, that will also help to reduce the spore exposure level.

If you’ve had corn smut problems in the past, trying a more resistant variety of sweet corn may help, too. Look for the white corn varieties before your next corn planting. These include: