Can You Grow Corn From The Cob? 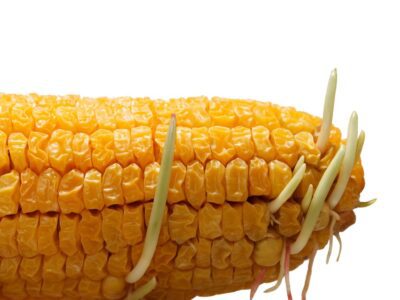 Corn is arguably one of the more popular “vegetables.” It is a fun crop to grow for adult and child alike. Usually corn germination is attained by planting corn seed (dried kernels) but can you grow corn from an ear of corn? Indeed, you can grow corn from a cob. Read on to learn how to propagate corn from a cob.

Propagating Corn on the Cob

Usually corn is propagated from seed, dried kernels, but it can also be grown from a cob of corn. This is a particularly fun project to do with kids that teaches them how their food is grown, plus the results are awe-inspiring, towering stalks.

Propagating corn via corn cobs isn’t particularly difficult. You will want to make sure the cobs you use look healthy with no mold or sign of disease or pests.

Corn is one of the common GMO crops in the United States. If you are concerned about GMOs, selecting and growing your own corn is the way to go. This way you can make sure the corn is not genetically modified.

Another concern is what type of corn you are growing. If this is just a science experiment, you may not care if the corn is field (dent corn) or feed corn, but if you want to grow the corn to fruition, you might select sweet corn for eating or popping corn.

Lastly if you are concerned about chemical controls and growing methods, select organically grown corn cobs for you propagation.

Propagating Corn from a Cob

Once you’ve selected your corn cobs, you can go a couple of different routes. If you want to grow corn to fruition, that is you want to produce corn cobs, it is best to dry the corn kernels completely, otherwise they tend to rot and will not germinate.

If you just want to experiment and show the kids (or yourself) how corn sprouts, you can use a fresh corn cob placed in a dish with an inch (2.5 cm) of water; there’s no need to submerge the cob. Place it in a sunny area and keep an eye on it.

Within a few days the corn kernels will have begun germinating. You will see shoots sprouting up from the kernels and roots growing in the water. Add more water as the corn absorbs it or if the water smells, replenish all the water. Sprouts will take about 2 weeks.

As the kernels germinate, some will become dislodged from the cob. These can be planted. Keep in mind that some will also mold; discard these.

Another method for germinating corn from a cob is by simply putting half the cob in the soil with half sticking out. Keep it moist until the kernels germinate. This is an option if you have fresh corn on the cob that’s starting to go south, but again, it is an experiment and may not yield any viable corn seedlings.

How to Grow Corn from Cob Kernels

To grow corn, you can plant the dislodged sprouted kernels as above. This may be more of an experiment than a promise of a harvest but it’s still fun.

If you really want to grow corn from a cob, you must dry the corn kernels first. Peel back or remove the husk to expose the kernels to dry air. Allow the ears to dry 2-3 months and then remove the kernels from the cob and either plant them or store in a sealed jar. Remove and discard any kernels that are an off color or show signs of mildew.

Printer Friendly Version
Read more about Corn
<Previous
Did you find this helpful? Share it with your friends!
FacebookTweetPinEmail
Related Articles
Newest Articles
You might also like…
Additional Help & Information