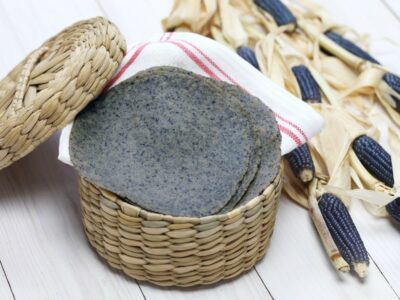 Products such as blue corn tortillas made with Hopi blue corn are increasingly popular. It’s no wonder their popularity is on the rise; blue corn is touted as one of the “superfoods” due to its abundance of antioxidants. These health benefits can be yours when you try growing your own blue corn.

Blue corn is an open-pollinated flour corn originally developed by the Hopi people, hence the name. The Hopi were a true agricultural society developing many varieties of corn, some of which exist to this day.

Interestingly, the color of the corn was associated with direction. For example, yellow related to the north, white to the east, red to the south and blue, west.

Hopi blue corn remains an essential ingredient in Hopi foods such as piki bread wherein the blue corn is ground into a sweet meal and formed into bread. Today blue corn meal is the primary ingredient in delicious blue corn tortillas.

Blue corn (Zea mays)  has a lower yield than hybrid dent corn, along with variable plant characteristics such as height, number of ears and lengthy bloom times. They also have a tendency toward toppling over, which is likely why products containing blue corn tend to be more costly. That said, growing blue corn is a bit more of a challenge but well worth the effort.

Most blue corn is open pollinated. A few hybrids do exist, but they are proprietary and only grown by commercial producers. Hopi blue corn can be grown in USDA zones 8-10.

When they are about 5 inches (12.7 cm.) tall, thin plants a foot (30.48 cm.) apart. Continue to provide an inch (2.5 cm.) of water per week. As the plants grow, spread a few inches (8 cm.) of organic mulch around them to retard weeds and retain moisture. If the leaves begin to turn yellow, side-dress the plants with a high nitrogen fertilizer.

When to Harvest Blue Corn

The timing for harvest will depend upon the variety and weather during the growing season but anywhere from 65-120 days is when to harvest blue corn. If your plan is to roast or fry the kernels, be sure to harvest during the milk stage which will result in sweeter products, such as the blue corn tortilla recipe below. A fingernail gently pushed into a kernel should yield milky fluid when ready.

Remove the blue corn kernels from the cob and wash well in a colander. Dissolve 1 tsp of limestone powder or “cal” in ½ C (120 ml.) of water. Add the dissolved cal to 32 oz (just under a liter) of water and heat to a low boil on the stove. This addition, an important step that alkalizes the corn making it easier to grind and more digestible, is called nixtamalization.

Add the corn kernels and simmer over medium heat for 25-40 minutes. The corn should feel velvety when done and should dent with a fingernail.

Remove the pot of corn from the heat and allow it to sit at room temp for 12 hours. After this time, pour the corn into a colander and rinse lightly with water.

Grind the wet kernels in a wet mill, food processor or blender; the smoother the dough, the better. Add a bit of water to make a slightly sticky dough, or masa.

Now you are ready to make blue corn tortillas. Roll the dough into balls about 2 inches (5 cm.) across and flatten in a tortilla press, or by using two flat cutting boards.

Heat a non-stick pan over high heat and cook the blue corn tortilla for 40 seconds until the edges begin to color and then flip over. Flip a third time to check the color and then remove from the pan.

Use immediately or seal tightly and refrigerate or freeze. Use or freeze any unused masa within 3 days.