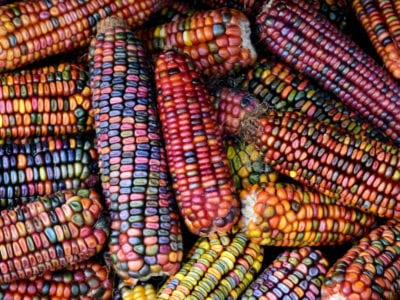 Ornamental corn plants can be implemented in a variety of decorative schemes to celebrate Thanksgiving or Halloween or just complement autumn’s natural hues.

There are six types of corn: dent, flint, flour, pop, sweet and waxy. The color of the ear has nothing to do with its classification; instead, corn is grouped by kernel type (endosperm). Most ornamental corn varieties are derived from pop type corn as a result of its smaller ears more suitable for indoor decorative purposes. Also called ornamental Indian corn, there are a multitude of ornamental corn plants valued for ear size; plant height; or color of kernel, husk or stalk.

Ornamental corn plants, just as sweet corn or field corn varieties, freely cross-pollinate and should therefore be isolated. So, one of the first things to consider when growing ornamental corn, if sowing more than one type, is to maintain a physical separation of 250 feet or greater and plant varieties whose maturation date is at least two weeks different.

Purchase disease resistant seeds or starts from a reputable nursery. When growing ornamental Indian corn, it is essential to have well-draining soil. Areas of sod that have been in fescue are ideal arenas for ornamental corn plants; however, an application of organic insecticide might be wise at planting time as their later harvesting date leaves them especially vulnerable to insect invasion.

Ornamental corn is harvested by hand after the husk has dried and when the ears are no longer green but dried slightly and fully mature. To harvest, break the ears off with a quick downward tug leaving the husk on to finish drying over the course of a week. After the weeks drying period, the husk may be removed for ornamental purposes.

The primary purpose for growing ornamental corn is for its decorative aspects. The beautiful fall colors of the ears and husks lend themselves to holiday and autumn wreaths, floral arrangements and groupings combined with festive, long lasting miniature pumpkins, gourds and hay bales.

Another of ornamental corn uses is its addition as a late fall, early winter food source for the critters in the home garden. Deer, groundhogs, raccoons and birds all enjoy dining on ornamental corn.