Poor Kernel Production: Why Are There No Kernels On Corn 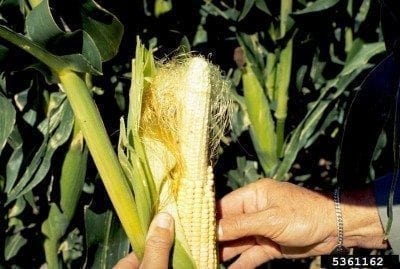 Have you ever grown gorgeous, healthy corn stalks, but upon closer inspection you discover abnormal corn ears with little to no kernels on corn cobs? Why is corn not producing kernels and how can you steer clear of poor kernel production? Read on to learn more.

Reasons for No Kernels On Corn

First of all, it’s helpful to know a little about how corn is formed. Potential kernels, or ovules, are seeds awaiting pollination; no pollination, no seed. In other words, each ovule must be fertilized in order to develop into a kernel. The biological process is very much like that of most animal species, including humans.

Each tassel is the male part of the corn plant. The tassel releases around 16 to 20 million specks of “sperm.” The resultant “sperm” is then carried to the female corn silk hairs. Carriers of this pollen are either breezes or bee activity. Each silk is a potential kernel. If the silk does not catch any pollen, it does not become a kernel. Therefore, if either the male tassel or female silk are malfunctioning in some way, pollination will not occur and the result is poor kernel production.

Abnormal corn ears with large bare patches are usually the result of poor pollination, but the number of ears per plant is determined by what type of hybrid is grown. The maximum number of potential kernels (ovules) per row is determined a week or so prior to the emergence of the silk, with some reports of up to 1,000 potential ovules per ear. Early season stresses can influence ear development and engender corn that is not producing kernels.

Other stressors that can affect the production of kernels are:

How to Get Corn to Produce

Sufficient nitrogen is needed in the early stages of corn development to set the maximum number of kernels. A weekly dose of a high nitrogen and high phosphorus food such as fish emulsion, alfalfa meal, compost tea, or kelp tea is recommended for healthy plants with maximum yield.

Plant your corn in blocks rather than rows, 6 to 12 inches (15-31 cm.) apart with plenty of compost and organic mulch around each corn stalk. This will aid in increasing pollination, simply due to close proximity. Lastly, maintain a consistent watering schedule so the plant does not have to deal with the stress of dry soil conditions.

Consistency, promotion of pollination, and avoiding putting the plant through stressful conditions are crucial for optimal kernel and general ear production.