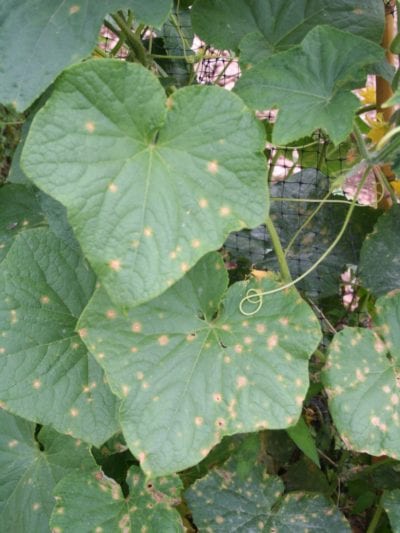 Anthracnose in cucumber crops can cause serious economic losses to commercial growers. This disease also afflicts most other cucurbits as well as many non-cucurbit species. The symptoms of cucumbers with anthracnose disease are often confused with other foliar diseases, which makes anthracnose control in cucumbers difficult. The following article discusses how to identify this disease and cucumber anthracnose treatment.

What is Cucumber Anthracnose Disease?

Anthracnose in cucumbers is a fungal disease caused by the fungus Colletotrichum orbiculare (C. lagenarium). It afflicts most cucurbits, other vine crops, and cucurbit weeds. Squash and pumpkins, however, are primarily immune to the disease.

In cucumbers, this disease is fostered by seasons of warm temperatures combined with frequent rain. When anthracnose control in cucumbers is not implemented, losses of 30% or more may be realized.

Symptoms of Cucumbers with Anthracnose

The symptoms of anthracnose vary somewhat from host to host. All aboveground parts of the plant may become infected. The first signs in cucumber crops appear on the leaves. Small water-soaked lesions appear, enlarging rapidly as the disease advances and becoming irregular in shape and darker in color.

The centers of older leaf lesions may fall out, giving the leaf a “shot hole” appearance. Lesions begin to appear on stems as well as fruit if present. On fruit, the pinkish spore masses are clearly visible.

As mentioned, anthracnose in cucumber crops may be confused with other diseases. Correct identification can be made using a hand lens or microscope. Anthracnose disease will appear as pink spore masses marred by hair-like structures.

Controlling anthracnose is a multi-tiered approach. First, plant only disease-free certified seed and sow only in well-draining soil free of runoff water.

Be sure to rotate with a crop other than another cucurbit every three years or longer. Control all weeds surrounding the cucumber crop and avoid handling the crop when it is wet, which can further spread the disease.

Fungicides can aid in controlling this fungal disease affecting cucumber crops. They will need to be applied more frequently during rainy periods. Those available are both chemical and organic. Organic options include potassium bicarbonate, coppers, Bacillus subtilis, and some horticultural oils. Follow the instructions provided by the manufacturer.

If a field has been infected with cucumber anthracnose disease, burn or cleanly plow down any infected plant debris.