Cucumber Plant Drops Fruit – Why Are Cucumbers Falling Off Vine 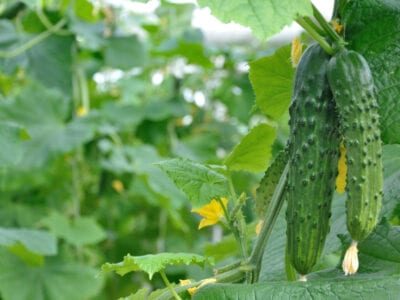 Cucumbers that are shriveling and dropping off the vines are a frustration for gardeners. Why do we see cucumbers falling off the vine more than ever? Read on to find the answers for cucumber fruit drop.

Why are Cucumbers Dropping Off?

Like most plants, a cucumber has one goal: to reproduce. To a cucumber, that means making seeds. A cucumber plant drops fruit that doesn’t have many seeds because it has to expend a lot of energy to raise a cucumber to maturity. Allowing the fruit to remain isn’t an efficient use of energy when the fruit isn’t likely to produce many offspring.

When seeds don’t form, the fruit becomes deformed and misshapen. Slicing the fruit in half lengthwise will help you understand what’s going on. The curves and narrow areas have few, if any, seeds. The plant doesn’t get much return on its investment if it allows defective fruits to remain on the vine.

Cucumbers have to be pollinated in order to make seeds. When a lot of pollen from a male flower is delivered to a female flower, you get a lot of seeds. The flowers from some types of plants can be pollinated by the wind, but it would take gale force winds to distribute the heavy, sticky grains of pollen in a cucumber flower. And that’s why we need bees.

As the bees work to prevent cucumbers from dropping off the vine, we often work to stop them. We do this by using broad-spectrum insecticides that kill bees or using contact insecticides during the day when bees are flying. We also stop bees from visiting the garden by eliminating diversified gardens where the flowers, fruit, and herbs that bees find attractive are grown near vegetables such as cucumbers.

Simply enticing more pollinators to the garden can help, as can hand pollination. Understanding why cucumbers fall off the vine should also encourage gardeners to consider the impact of their actions when using chemicals for weed or pest control.