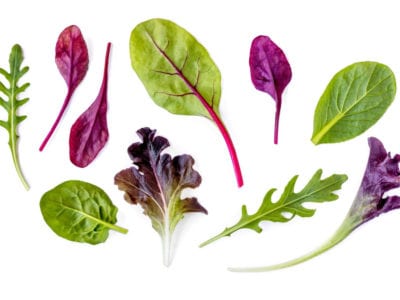 If you aren’t a huge fan of salads, maybe it’s the greens you are using. Romaine hearts or iceberg wedges are definitely rather mundane with little, if any, discernible flavor. The good news is that there are plenty of alternative salad greens — lettuce substitutes that is. Alternatives to lettuce are generally higher in nutrients and more flavorful. Plus, substitutes for lettuce are not necessarily green which makes them a feast for the eyes as well as the palate.

About Alternatives to Lettuce

Lettuce comes in many forms: iceberg or crisphead, bibb or butterhead, Romaine or Cos, leaf lettuce and stem lettuce. Even so, many folks find the varieties downright uninspiring. Plus, these lettuce varieties are generally one hit wonders, used solely in salads or on sandwiches.

Substitutes for lettuce can often be used in salads or on sandwiches but alternative salad greens can often do so much more. Many of them can be sautéed, added to soups and entrees, or even used as wraps.

What to Grow Instead of Lettuce

A common alternative to lettuce is spinach. Spinach is a terrific substitute for lettuce, and it contains more nutrients. It can also be eaten fresh or cooked.

If you are looking for substitutes for lettuce that are bit more unusual but like the flavor of spinach, try growing Good King Henry (Chenopodium bonus-henricus). This robust perennial will give fresh greens year after year that can be used just like spinach. The leaves have a bit of bitterness if not prepped properly. Soak the leaves in salted water for an hour, rinse, and then use as you would spinach.

Belgian endive is a nice substitute for the crunch of Romaine hearts with much better flavor and they are available during the winter months.

As mentioned above, not all alternative salad greens are green. Take radicchio for instance. It looks like a small red/purple cabbage variegated with white. It is also a winter alternative to lettuce, crunchier than iceberg, and won’t wilt when tossed with dressing.

For a huge pop of color, try Rainbow Chard. Hailing from the Mediterranean, Rainbow Chard is a lovely combination of sweet with a touch of bitterness and pairs well with sweet fruit and honey based vinaigrettes in salads or can be sautéed in a variety of ways.

Kale has been king for quite some time due to its nutritional value. If curly kale isn’t your thing though try growing Lacinato kale. Lacinato has a broader leaf which makes it great for use in salads with heavy, creamy dressings, a great substitute for romaine in Caesar salads. It is also called dinosaur kale, a name which might make it more palatable to the kiddies.

Arugula can be a bit costly at the grocery store, but it is easy to grow and spices up everything from a de rigueur salad to a last minute topping on a garlic and goat cheese pizza.

Similar in flavor to arugula is red dandelion. Yes, somewhat like the weed but rich in nutrients and delicious. If you’re interested in “weed” greens, try tossing some purslane and lambsquarter into your next salad.

Growing your own greens is a less expensive, simple way to vary your diet of greens and there are so many options. Most are much higher in nutrition than the basic lettuces sold at the supermarket as well so there’s no reason not to try something new in your next salad.

Printer Friendly Version
Read more about Greens
<Previous
Did you find this helpful? Share it with your friends!
FacebookTweetPinEmail
Related Articles
Newest Articles
You might also like…
Additional Help & Information