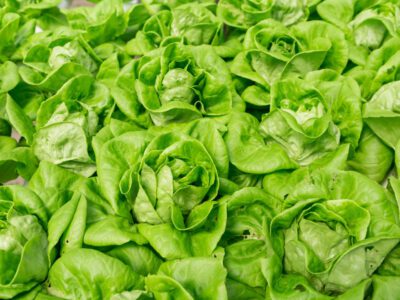 Downy mildew in lettuce can affect both the appearance and the yield of a crop. It has serious implications in commercial growing because the disease spreads easily in certain environmental conditions. It affects the leaves of the plant, which, unfortunately, is the part we eat. Leaves are discolored and become necrotic, eventually progressing to the stem. Control methods for lettuce with downy mildew start with using resistant varieties and the use of fungicides.

What is Lettuce Downy Mildew?

Fresh, crisp lettuce is a year-round treat. A nicely made salad is a perfect start to any meal and usually features fresh lettuce. The vegetable is easy to grow, even in the home garden, but certain pests and diseases can wreak havoc on crops. One of these is downy mildew. What is lettuce downy mildew? It is a fungus that spreads easily in certain weather conditions and can be very hard to control. Crop losses are common and the spores that cause it can spread over long distances.

Downy mildew can affect lettuce at any stage of growth. It stems from the fungus Bremia lactucae. The spores of this fungus splash up onto plants with rain or are airborne. It was reported in Europe in 1843, but not known in the U.S. until 1875. Spores form during the night and are released during the day when humidity is lowered. A second generation of spores is produced within 5 to 7 days.

Between the prolific nature of the spores and the ease of spread, the disease can infect an entire crop in no time. Downy mildew in lettuce becomes epidemic in periods of cool weather with high daytime humidity.

The early symptoms on seedlings are white cottony growth on the young plants followed by stunting and death. Older plants have the outer leaves affected first. They will display lighter green to yellow spots at the veins. Eventually, these become tan to brown and necrotic.

The white, fluffy growth is produced on the underside of the leaf. As the outer leaves become infected, the disease progresses to the interior leaves. If allowed to progress, the fungus will penetrate to the stem where stem rot occurs. The fungus also allows outside bacteria to infect the tissue, speeding up the deterioration of the head.

In mature plants that have only recently developed the fungus, the outer leaves can be removed and the head will usually be fine to consume.

Control of the disease can be achieved by using resistant strains of lettuce seed. In commercial stands, both systemic and foliar fungicides are used but must be applied before any signs of the disease.

Irrigation systems that are set up to prevent wet leaves have excellent control, as does the provision of plenty of ventilation.

The timing of planting can also be important to effective lettuce downy mildew treatment. If possible, choose a time when ambient moisture isn’t at its height. Also, select an area in the garden that will dry quickly of nighttime dew.

Watch lettuce crops carefully for any sign of the fungus and treat or remove plants immediately.

Printer Friendly Version
Read more about Lettuce
<PreviousNext>
Did you find this helpful? Share it with your friends!
FacebookTweetPinEmail
Related Articles
Newest Articles
You might also like…
Additional Help & Information