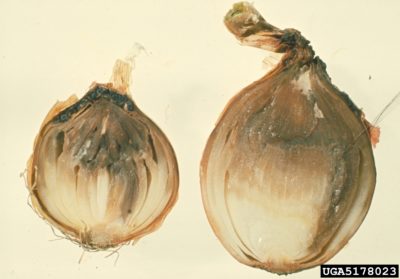 Onion neck rot is a serious disease that most commonly affects onions after they have been harvested. The disease makes the onions become mushy and water soaked, causing damage on its own and also opening up a pathway for a host of other diseases and fungi to enter and break down the onion. Keep reading to learn more about identifying and treating onions with neck rot.

Symptoms of Neck Rot in Onions

Onion neck rot is a disease caused by a particular fungus, Botrytis allii. This fungus affects alliums such as garlic, leeks, scallions, and onions. It is often not identified until after harvest, when the onions are either damaged during transportation or not cured properly before storage.

First, the tissue around the neck of the onion (the top, facing the foliage) becomes water soaked and sunken. The tissue may become yellow and a gray mold will spread down into the layers of the onion itself. The neck area may dry out, but the flesh of the onion will become mushy and rotted.

Black sclerotia (the fungus’ overwintering form) will develop around the neck. The wounds caused by onion botrytis also open the tissue up to infection from any number of other pathogens.

The best way to prevent onion neck rot after harvest is handling the onions gently to minimize damage and curing them properly.

Let half the leaves turn brown before harvesting, allow them to cure in a dry place for six to ten days, then store them until ready for use in a dry environment just above freezing.

In the field or garden, plant only disease-free seed. Space plants about one foot (31 cm.) apart and wait three years before planting onions in the same spot. Don’t apply nitrogen fertilizer after the first two months of growth.