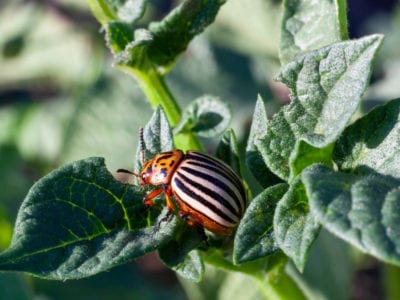 Potato beetles are pests of plants in the nightshade family. Potatoes are one plant they devour, but the beetles also eat tomatoes, eggplants, and peppers. Both the adults and the larvae eat the leaves of these plants. Getting rid of potato beetles is a priority for the vegetable gardener due to the range of plants the pest can infest. It’s important to know how to look for potato beetle signs so you can be ready to eradicate the insects.

Both adult beetles and the larvae feed on the leaves of nightshade plants. The adult beetles are small yellow and black striped beetles. The young are hard bodied red insects with a row of ridges across their humped backs. The young also have a line of black dots along each side of their bodies.

The eggs of potato beetles are bright orange and laid on the underside of leaves. Foliage damage starts out as small holes and becomes larger ragged patches. The damage to the leaves can reduce the vigor of the plant and reduce yield. Controlling Colorado potato beetle will increase your crops and help prevent egg laying and the return of the insect the next season.

Getting Rid of Potato Beetles

Controlling Colorado potato beetle begins with an assessment of the damage. In most cases, the foliar damage isn’t enough to kill a plant but if infestation occurs early in the growing season you should kill Colorado potato beetles. Insecticides should only be used when damage is severe and there is more than one insect per plant. Hand picking can remove many of the pests. A natural bacteria, Bacillus thuringiensis, is useful as a non-toxic control.

Several sprays exist to kill Colorado potato beetle. Timing is an important consideration, in order to get the maximum number of insects. Small larvae are easier to control than adults and mature larvae, therefore, spray when the larvae have just hatched in spring. Use a chemical with pyrethroid or spinosad, which offer control on each species of nightshade.

How to Prevent Potato Beetles

Adult beetles overwinter in the soil and then crawl out to begin feeding and laying eggs. Check the backsides of leaves for the orange eggs and crush them to prevent a future generation of the pests.

Another way to prevent potato beetles is to keep beds free of debris that gives the adults hiding places. Remove old plants each season and till the vegetable bed. Do not plant nightshade plants in the same location each year but rotate to prevent putting them where the insects already live.