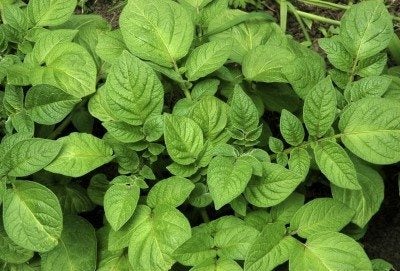 Potato plants are grown for their edible tuber or some varieties are grown simply as ornamentals. Anyone who has grown either type can attest to the fact that healthy potato plant growth may get a bit out of hand at times. It makes one wonder, “Should I cut back the potato plants?” If so, how does one trim potato plants?

Can You Prune Potato Plants?

The answer to, “Can you prune potato plants?” is yes, but perhaps that is not the right question. After all, you can pretty much prune anything, although it’s not always the best idea. The correct question is, “Should I cut back the potato plants?” For the most part, potato plants use the nutrients from the foliage to grow healthy spuds. That said, there are some instances where it may be beneficial to prune the tubers to restrain the potato plant growth.

Pruning potato vines can help the potatoes mature earlier, before they attain their full size. Pruning potato vines and then leaving them in the soil for at least two weeks, post pruning, will help them develop a thick, protective skin. A thick skin is important for storage, allowing the spuds to be kept for up to six months following harvest.

How to Trim Potato Plants

To trim your edible potato plants, pinch off the blossoms as soon as they appear on the plant, or snip them off with shears. Blossoms are an indicator that the plant is mature and small tubers are formed. Removing the flowers removes the competition and fosters larger, healthier potatoes.

Prune the potatoes when the foliage has wilted. Prune the plant down to ground level, 1 inch (2.54 cm.) above the soil surface. Don’t cut them any lower than this, as you may expose the tips of shallow potatoes. Wait two weeks to dig the tubers out to allow the potato skin to thicken.

Pruning of ornamental potatoes, such as Ipomoea, can occur any time the plant has outgrown its surroundings. Generally, at this point the tuber is mature. These ornamentals can be aggressively pruned with no ill effects. In fact, the plant will branch out and rapidly begin filling in the space. Unlike edible potatoes, ornamentals can be pruned right down to the ground, if needed.

Cut back the ornamental potato vines from spring through fall, as needed, to contain the size or shape of the plant. Pruning will also increase the bushiness of the plant, as it encourages branching at the cut sites. Prune judiciously or not at all if you prefer longer, vine-like foliage.

If you live in a mild climate, some potato vines will grow year round and need continuous pruning. Trim back any foliage that has been killed back or damaged after the first frost, down to the soil line or one inch (2.5 cm.) above it. When the weather warms up, you will likely have another chance at seeing the glory of your ornamental potato vine.