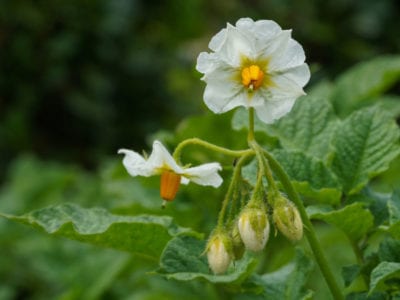 Tomatoes and potatoes are in the same family: the Nightshades or Solanaceae. While potatoes produce their edible product under the ground in the form of tubers, tomatoes bear an edible fruit on the leafy part of the plant. Occasionally, however, gardeners will notice tomato looking things on potato plants. The reasons why potato plants flower are environmental and do not affect the edible nature of the tubers. If you find your potato plant flowering, you might even be able to grow a true potato plant, which doesn’t carry the same characteristics as the parent plant.

Potato plants produce flowers during the end of their growing season. These turn into the true fruit of the plant, which resemble small, green tomatoes. Potato plant flowering is a normal occurrence, but the flowers usually just dry up and fall off rather than producing fruit.

Can a potato plant grow a tomato? The fruits may look a lot like a tomato but are just the berry of the potato plant. The berries are not edible but they don’t affect the development of the tubers.

Although the fruit doesn’t harm the growth of the tubers, the little fruits can be a dangerous attraction to children. Where potato plants turned into tomatoes, the fruits create additional interest to the leafy greens. That said, nightshade plants have high levels of a toxin called solanine. This is a poisonous substance that can cause illness in people, especially children.

In areas where children are at play, it is best to remove the fruit and the temptation from eager, little hands. The fruit’s resemblance to sweet cherry tomatoes can pose a hazard to little ones.

If your potato blossoms turned into tomatoes, you can try growing plants from the seeds. Potato fruits have seeds inside just like any berry. You can cut open the berries and remove the seeds to plant. However, the seeded potatoes take longer to produce a plant than those planted from tubers. The resulting plants will not produce the same type of potato as the parent plant either.

The seeds will need to be started indoors because they do take such a long time to produce. The easiest way to separate the seeds is to mash the berry and put the resulting mix into a glass of water. Let it sit for a few days and then strain out the top debris. Seeds will be at the bottom of the glass. You can plant them immediately or dry them and wait until later.