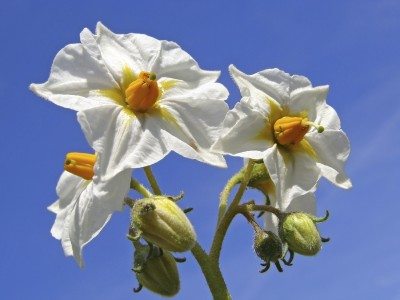 If you have ever grown potatoes before, you are familiar with the process of planting seed potatoes. The term “seed potato” is actually a misnomer and a bit confusing when, in fact, it is actually a tuber and not a seed that is planted. This confusion leads one to ask, “Do potatoes produce seeds?” and, if so, “Why isn’t potato seed used for growing purposes?”.

Yes indeed, potatoes produce seeds. As with most plants, potato plants bloom, but usually the flowers dry and fall from the plant without setting fruit. You’re more likely to see potato seed growing on plants in regions where temperatures are on the cool side; these cool temps combined with long days promote fruiting in potato plants.

Additionally, some cultivars are more prone to fruiting than others. Yukon Gold potatoes are one example. This potato seed pod or berry is referred to as a “true potato seed.”

What is True Potato Seed?

So, what is true potato seed and why don’t we use it instead of tubers (seed potatoes) to propagate?

Potato plants produce small green fruits (berries) filled with hundreds of seeds and about the size of a cherry tomato and with much the same appearance. Although they resemble tomatoes and are in the same family as tomatoes, the nightshade family, this fruit is not the result of cross-pollination with tomatoes.

The fruit, although similar in appearance to a tomato, should never be eaten. It contains toxic solanine, which can cause headaches, diarrhea, cramps, and in some cases, coma and death.

While potatoes grown from tubers or seed potatoes produce an exact genetic clone of the mother plant, those grown from true potato seed are not clones and will have different characteristics than the parent plant. True potato seed is most often used by plant breeders to facilitate hybridization and fruit production.

Potatoes grown on commercial farms are hybrids selected for their disease resistance or high yields that can only be passed on through “seed potato.” This assures the grower that the desired qualities of the hybrid are passed down.

It is possible, however, to grow potatoes from true potato seed. It is wise to use heirloom potato varieties, as potato seed pods from hybrids will not produce good quality spuds.

To grow potatoes from true potato seeds, you need to separate the seeds from the rest of the fruit. First, gently mash the berries, then place in water and let sit for three or four days. This mix will begin to ferment. The resulting floating fermentation should be poured off. Viable seeds will sink to the bottom and should then be rinsed well and allowed to dry on a paper towel.

Seeds can then be labeled and saved in a cool dry place until planting season. The seeds should be started indoors in the winter since plants started from seed take longer to develop than those started from tubers.