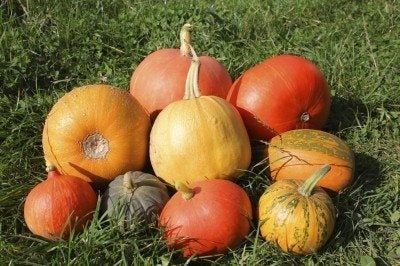 Pumpkins are a versatile, flavorful winter squash, and they’re surprisingly easy to grow. Often, the hardest part of growing pumpkins is deciding which type of pumpkin is best suited for your particular needs and available growing space. Read on to learn about different kinds of pumpkins, and common pumpkin varieties.

Mini pumpkin varieties, weighing in at 2 pounds (1 kg.) or less, are easy to grow and perfect for decorating. Small pumpkins ranging from 2 to 8 pounds (1-4 kg.) and midsize pumpkins weighing 8 to 15 pounds (4-7 kg.) are ideal for pies and great for painting or carving.

At 15 to 25 pounds (7-11 kg.) and up, big pumpkins are often good for pies and make impressive jack o’ lanterns. Giant pumpkin varieties, which weigh at least 50 pounds (23 kg.) and often much, much more, tend to be tough and stringy and are usually grown for exclusive bragging rights.