Pollination Of Pumpkin Plants: How To Hand Pollinate Pumpkins 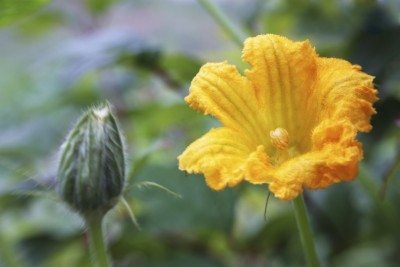 So, your pumpkin vine is glorious, large, and healthy looking with deep green leaves and it’s even been flowering. There’s one problem. You see no sign of fruit. Do pumpkins self-pollinate? Or should you give the plant a hand and, if so, how to hand pollinate pumpkins? The following article contains information about the pollination of pumpkin plants and hand-pollinating pumpkins.

Before you panic about the lack of fruit, let’s talk about pumpkin plant pollination. First off, pumpkins, like other cucurbits, have separate male and female flowers on the same plant. That means that it takes two to make fruit. Pollen must be moved from the male flower to the female.

The first blooms to appear are male and they remain on the plant for a day and then fall off. Do NOT panic. Female flowers bloom within the week or so and males will continue to bloom as well.

The simple answer is no. They need bees or, in some cases, you to pollinate. Male flowers produce nectar and pollen, and females have higher quantities of nectar but no pollen. Bees visit the male flowers where the large, sticky granules of pollen adhere to them. They then move on to the heavenly nectar produced by the females and, voila, the transfer is complete.

The quality of the fruit is improved by increased pollinator activity. Now, for a number of reasons, despite the presence of both male and female flowers, the pollination of the pumpkin plants doesn’t seem to be happening. Perhaps broad-spectrum pesticides have been in use nearby or too much rain or heat is keeping the bees inside. Either way, hand-pollinating pumpkins may be in your future.

How to Hand Pollinate Pumpkins

Before you can start hand pollinating the pumpkin plant, you need to identify the female and male blooms. On a female, look at where the stem meets the flower. You will see what looks like a small fruit. This is the ovary. Male flowers are shorter, lack immature fruit, and usually bloom in clusters.

That’s it! Once pollination has occurred, the ovary begins to swell as the fruit develops. If fertilization did not occur, the ovary will wither away, but I have every confidence that you will be a successful hand pollinator.