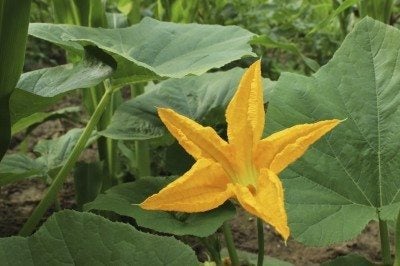 A common problem when growing pumpkins is…no pumpkins. It’s not all that unusual and there are several reasons for a pumpkin plant that is not producing. The primary reason for healthy, glorious pumpkin vines but no pumpkins is lack of pollination. So how can you tell if your pumpkin got pollinated?

How Can You Tell if Your Pumpkin Got Pollinated?

Chances are good that if the vines have been completely devoid of fruit, the culprit is likely pollination or rather lack of it. If you did see some small fruit, they may have aborted due to a stressor such as hot, humid weather, lack of water, or some critter decided to munch on them.

Pumpkins are members of the Cucurbit family, which includes squash, cantaloupe, watermelon, and cucumbers. All of these members rely on bees for pollination. They produce both male and female flowers. Male flowers appear first, so if you see the pumpkin vine flowering but no fruit and it’s early in the season, don’t panic. It may just be a matter of waiting for the female flowers. Female flowers appear further down the vine and may not show for up to two weeks after the appearance of the males.

It’s easy to tell the difference between the male and female blossoms. Male flowers are borne straight off the vine while females have a small fruit swelling at the base near the stem. Males are produced first to entice bees into programming them into their pollen route.

If the weather is overly hot and humid early in the season, some plants delay the production of female flowers. If the pumpkin delays female blossoming, late sets often do not have time to develop before the days shorten and colder weather sets in. Also, too much nitrogen in the soil can result in the production of primarily male pumpkin vine flowering or even lush, healthy pumpkin vines but no flowers or pumpkins.

If, however, you’ve checked and have both male and female flowers and it’s late in the season, there was probably an issue with pollination.

Additional Reasons Why a Pumpkin Plant Flowers but Sets No Fruit

As mentioned, weather may be why a pumpkin plant flowers but sets no fruit. Not only heat, but drought stress often causes the pumpkin to develop more male flowers and delay females. Flooded soil will also damage root systems, causing wilting and flower or fruit abortion.

Planting too close together increases shade, which will affect how and when the pumpkin flowers. Close competition also makes it difficult for bees to get to the blossoms. The shaded areas may be under pollinated because it is cooler. Bees get lazy when it’s below 60 degrees F. (15 C.) and temps in shaded areas may be too cool to entice them.

Pumpkin flowers are only open for about six hours beginning at sun up. Bees only have this window of time to move the pollen from male to female blossoms and several visits to the female need to occur for successful pollination (one visit every 15 minutes!). Windy, stormy weather also keeps the bees in bed, so reduced fruit sets occur.

To increase the likelihood of successful pollination, you can try your hand at it, literally. Hand pollination may be the way to go. Hand pollinate before 10 a.m. on a day when a female flower is about to open. You may need to keep an eye on them for a few days. Select a male flower and touch the stamen with your finger to see if the pollen comes off. If it does, the pollen is ready. You can use a soft brush or cotton swab or remove the entire male flower to transfer the pollen from the stamen of the male to the stigma of the female.

If all goes well, meaning the weather cooperates, the plant gets six to eight hours of sun and consistent water, hand pollination is a fairly sure way to correct a pumpkin plant that is not producing.