Pumpkin Fruit Drop: Why Do My Pumpkins Keep Falling Off 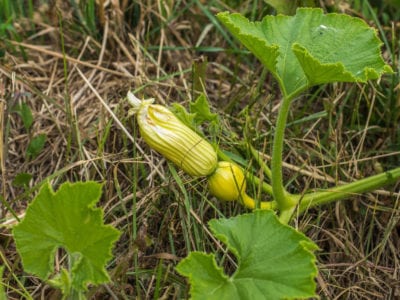 Why do my pumpkins keep falling off the vine? Pumpkin fruit drop is a frustrating state of affairs for sure, and determining the cause of the problem isn’t always an easy task because there may be a number of things to blame. Read on to learn about troubleshooting causes of dropping pumpkin fruit.

Poor pollination is probably the most common reason for pumpkins falling off the vine, as the window of time for pollination is very narrow – about four to six hours. If pollination doesn’t occur during that time, the blooms will close for good, never to be pollinated. To get around this problem, remove a male blossom and rub the stamen directly on the female bloom. This should be done in the early morning.

How to tell the difference? Male blooms generally appear a week or two before female blooms – generally at a rate of two or three male blooms for each female bloom. The pollen, which is in the center stamen, will come off on your fingers if the male flower is mature enough to pollinate the female. The female bloom is easy to spot by the tiny round fruit that appears at the base of the bloom.

If the tiny fruit begins to grow, you know pollination has successfully taken place. On the other hand, without pollination, the little fruit will soon wither and drop off the vine.

Although nitrogen is helpful in the early stages of plant growth, too much nitrogen later on can put baby pumpkins at risk. Cutting back on nitrogen will prompt the plant to direct its energy into producing fruit instead of foliage.

A balanced fertilizer is fine at planting time, but after the plant is established and blooms appear, apply a low-nitrogen fertilizer with an NPK ratio such as 0-20-20, 8-24-24, or 5-15-15. (The first number, N, stands for nitrogen.)

Excess humidity or high temperatures can create stress that may cause dropping pumpkin fruits. There isn’t much you can do about the weather, but proper fertilization and regular irrigation can make the plants more stress-resistant. A layer of mulch will help keep the roots moist and cool.

This problem, which begins as a watery spot on the blossom end of the small pumpkin, is due to a lack of calcium. Eventually, the pumpkin may drop from the plant. There are several ways to get around this problem.

Once again, avoid high nitrogen fertilizers that can tie up calcium in the soil. Keep the soil evenly moist, watering at the base of the soil, if possible, to keep the foliage dry. A soaker hose or drip irrigation system simplifies the task. You may need to treat the plants with a commercial calcium solution formulated for blossom end rot. However, this is usually only a temporary fix.