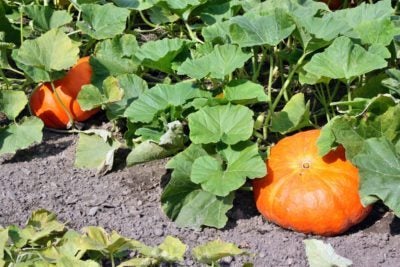 Native to North America, pumpkins have been grown in every state of the union. Those with previous experience growing pumpkins know all too well that it’s impossible to keep the rampant vines contained. No matter how often I move the vines back into the garden, invariably, I end up inadvertently cutting back pumpkin vines with the lawn mower. This never seems to affect the plants and, in fact, the pruning of pumpkin vines is a fairly common practice. The question is when do you trim a pumpkin? Read on to find out how to prune pumpkins and other information on pumpkin vine pruning.

When to Trim a Pumpkin

Pumpkin vine pruning, as long as it is done judiciously, doesn’t harm the plants,  as is evident by my inadvertent hacking of the vines while mowing the lawn. That said, cutting them back hard will reduce the foliage enough to affect photosynthesis and affect the plant’s health and productivity. Pruning is done to achieve one or both of the following: to reign in the plant’s size, or to promote the growth of a select pumpkin per vine.

Otherwise, pumpkins can be trimmed back whenever they are getting in the way as long as you are prepared to lose potential fruit. Pruning pumpkin vines is necessary for folks growing “the big one,” those trying to attain the lofty goal of winning the state fair’s blue ribbon for giant pumpkins.

How to Prune Pumpkins

If you are in the running for the largest pumpkin grown in your area, you already know how to prune a pumpkin, but for the rest of us, here’s how to cut back a pumpkin.

As they develop, remove the tertiary vines from the secondary vines. Cut close to the intersecting secondary vines with pruning shears. Measure the main vine and cut it to 10-15 feet (3-4.5 m.) from the last fruit on the vine. If the plant has multiple main vines (a plant may have 2-3), then repeat the process.

Wait to cut the main vines until the fruit has developed enough to determine which fruit is the healthiest looking on the vine, then prune the vine to remove weaker pumpkins. Continue to cut the main vine as it grows to allow the plant to put all of its energy into the remaining fruit instead of vine growth. Again, bury the cut ends of the vine in the soil to protect from disease and retain moisture.

Move the secondary vines 90 degrees from the main vine so they don’t overlap as they grow. This provides more room for the fruit to develop and allows for better air flow and access to the vines.