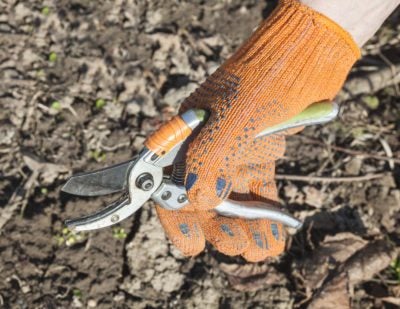 When it comes to using garden shears, choosing the right pair is essential. Unfortunately, selecting from the many different kinds of shears on the market these days can be overwhelming, especially if you aren’t sure exactly what type you need. What are garden shears and how do you select a pair to get the job done? Read on for a few helpful tips.

What are Garden Shears?

Basically, garden shears are used to cut branches and stems up to about ¾ inch (2 cm.) in diameter. Don’t attempt to use your garden shears on larger branches because you risk ruining the blades. (You need a different tool for that job.)

There are two basic types of garden shears, although they come in different models and sizes. Knowing when to use shears depends on the type you have and the task at hand.

Bypass shears work much like scissors with curved blades. The upper blade of the shears is sharp and cuts the branch while the lower blade works much like a hook, holding the branch in place to prevent it from sliding.

Anvil shears have a sharp upper blade and a flat lower blade. Anvil shears cut branches much like using a knife on a cutting board.

Although the type of shear depends largely on personal preference; most gardeners opt for bypass shears. Here’s why:

On the other hand, anvil shears may be better for dead or dried-out branches. Some garden experts use bypass shears for live growth and anvil shears for dead growth. Others say they would never use anvil pruners under any circumstances.

Once you’ve made your decision, buy the finest garden shears you can afford. They aren’t cheap, but with proper care, they will last for many years.

Hold the shears in your hand and try them out to be sure they’re comfortable. Ergonomic shears and shears for smaller hands are available. Some companies manufacture left-handed or ambidextrous garden shears.

Be sure the shears can be dismantled for easy cleaning. Look for a pair that has a lock or catch to keep the blades safely closed when not in use, especially if you have young children.