Pumpkin Uses – What To Do With Pumpkins From The Garden 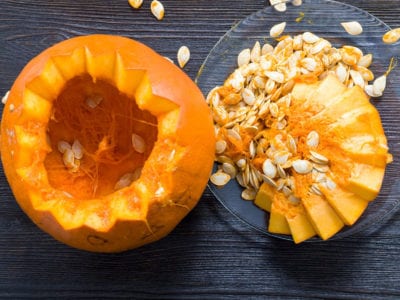 If you think pumpkins are just for jack-o-lanterns and pumpkin pie, think again. There are many ways to use pumpkins. While the aforementioned are practically synonymous uses for pumpkins around the holidays, there are many other ways of using pumpkins. Not sure what to do with pumpkins? Read on to learn about creative pumpkin uses.

What to Do with Pumpkins After the Holidays

The tradition of jack-o-lanterns came to the U.S. via Irish immigrants (though they were actually turnips rather than pumpkins), and while it is a fun and imaginative project, the end result is often tossed out after a few weeks. Instead of throwing the carved pumpkin away, cut it up into pieces and leave it outside for our feathered and furred friends to snack on or add it to the compost pile.

Ways to Use Pumpkins in the Kitchen

Pumpkin pies are fantastic, as are pumpkin cheesecakes and other pumpkin related desserts. Many people use canned pumpkin, but if you have access to fresh pumpkins, try making your own pumpkin puree to use in these treats.

To make pumpkin puree, cut a pumpkin in half and remove the guts and seeds, but save them. Place the cut end down on a baking dish and bake for 90 minutes or so depending upon the size of the pumpkin, until you can squeeze it some and there is give. Scoop the cooked pulp from the skin which can then be discarded. Cool the puree and then use it in a myriad of desserts, pumpkin butter, curried pumpkin soup, or package it and freeze for later use.

Remember those seeds? They can be laid in a single layer on cookie sheets to dry and used as bird seed or roasted in the oven with salt or other seasonings for human consumption. If you plan to feed them to animals, leave the seasoning off.

The guts saved from making the pumpkin puree can also be used. Just simmer it in water for 30 minutes and then strain the solids from the infused water. Voila, you have pumpkin stock, perfect for thinning out a pumpkin based or vegetarian soup.

Other Uses for Pumpkins

Pumpkin may taste great in many recipes, but it also has nutritional benefits. It is high in vitamin A and C, and rich in zinc and other nutrients. These nutrients are good for the inside of your body, but how about the outside? Yes, yet another way of using pumpkin is to make a mask with the puree. It will help dissolve dead skin cells, resulting in glowing, smooth skin.

Other pumpkin uses include making the squash into a bird feeder, a beer or beverage cooler, or even as a flower planter. There are certainly many other ways to use pumpkins, only limited by your imagination.