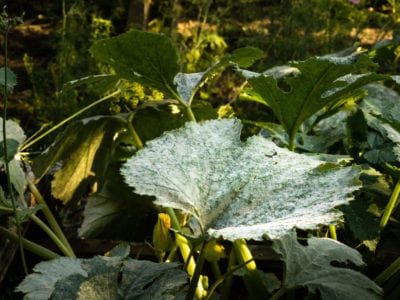 We often have the perfect storm of summer weather conditions to contribute to a severe infection of powdery mildew on squash, specifically our butternut and spaghetti squash. The squash leaves with mildew die back, exposing the fruit to sunscald at its formative stage. It’s not uncommon for squash leaves to have powdery mildew, but since it affects yield, how can you go about treating powdery mildew in squash? Read on to learn more.

Powdery mildew spreads rapidly and can travel a long distance. In addition to squash plants, it may afflict any number of veggies, including:

Contrary to what you might think, powdery mildew on squash is not prevalent during wet growing seasons. In fact, moist conditions are not necessary at all to foster this fungus, and it quite likes it hot. Hence, the aforementioned “perfect storm” is an unusually dry, hot summer.

So how do you identify powdery mildew in squash? This disease is fairly obvious in appearance. It appears on older leaves first, as reddish-brown spots. At the onset, the disease can only be identified via microscope, but quickly it will become apparent as it rapidly spreads to create white, mildew-covered leaves, petioles, and stems. This powdery mycelium makes the leaves appear to have been dipped in talc. The leaves lose their normal dark green hue, turn pale yellow, then brown, and finally shrivel, leaving the squash exposed to sunburn.

Conidia (spores) are rapidly produced in the powdery mycelium and any wind or air movement carries them to adjacent plants and leaves as well as off to plants situated even farther away. In fact, it only takes three to seven days from initial infection to appearance of symptoms. Powdery mildew thrives in dense plantings, shaded to low light exposure and high relative humidity. Infection can occur anywhere between 50-90 F. (10-32 C.), but it favors warmer temps up to 80 F. (26 C.), but not over 100 F. (37 C.). Also, powdery mildew in cucurbits is spread because the disease overwinters and is spread to successive generations of squash.

Along with the perfect storm of weather conditions, we no doubt aid and abet the disease. As mentioned above, the disease overwinters. Practicing crop rotation will go a long way in preventing the spread of powdery mildew. Do not plant cucurbits in the same area for at least two years. We did not always practice crop rotation; I blame my other half.

Additional management techniques for treating powdery mildew in squash are to destroy any diseased plant debris, space plantings since a densely planted plot are more likely to be infected, and plant resistant varieties when possible. Also, keep the garden free of weeds. Powdery mildew control may also need to be combined with a timely application of a fungicide.

When using fungicides, it’s too late for them to be of any use once symptoms become rampant. Fungicides work by preventing infection of healthy foliage, so find the infection early. There are a number of organic options available as well as traditional fungal sprays.

Whatever you choose, remember the key is an early application, before the disease is readily apparent all over the foliage.