The Differences Among Pumpkin and Squash and Gourds 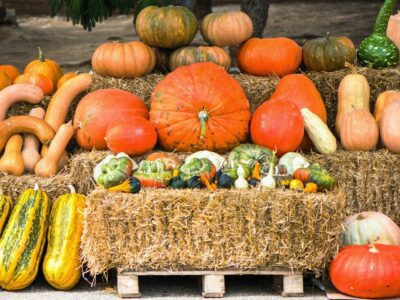 As fall approaches many happy home gardeners begin decorating with colorful bounties from the garden, farmer’s market or local store. Yet, distinguishing between squash, pumpkins and gourds is not always easy. This leaves many home decorators wondering, “Is a pumpkin a squash or a gourd or is a pumpkin just a pumpkin?

The Differences Among Pumpkins, Squash and Gourds

In the simplest terms, we carve pumpkins, cook squash and decorate with gourds. Yet, the lines between these three terms are somewhat blurred. Not all pumpkins are grown for jack-o-lanterns and some gourds can be eaten when young.

Let’s unravel this mystery by first talking about the similarities between the three. They are all members of the Cucurbitaceae family. In addition to pumpkins, squash and gourds, this family is also home to cucumbers and melons. As you may have guessed, cucurbits are herbaceous vining plants. However, some members like zucchini grow on very short vines.

To break it down further, pumpkins, squash and gourds have varieties in the Cucurbita pepo species. Yet pumpkins and squash cultivars can also be found in Cucurbita maxima, Cucurbita moschata and Cucurbita mixta. Thus, scientific classification alone doesn’t clearly distinguish among the three. We have to dig a little deeper.

Some people say that pumpkins are simply a type of squash. When we consider the difference between squash and pumpkin, it’s often based on shape, size and usage. We typically think of pumpkins as being larger and rounder than most squash. Of course, there are exceptions such as miniature pumpkins, pie pumpkins and round varieties of squash like acorn and buttercup.

Pie, or sugar pumpkins as they are sometimes called, are not only smaller, but also tend to be sweeter with a creamier flesh than those grown for carving. As a generality, we could say that pumpkins grown for consumption are often used in desserts or baked goods, like muffins and cakes.

On the other hand, the various types of squash are typically used in entrees or side dishes that have spicy or savory flavors. It should be noted, however, that butternut squash is considered sweeter than sugar pumpkins and delicata squash has a flesh that rivals the creaminess of pie pumpkins. So again, the lines are blurred.

One way we often distinguish between gourds and squash is that gourds are grown primarily for decoration or use in crafts, while squash is cultivated for food. Yet, some types of gourds, like the snake gourd (Trichosanthes cucumerina) can be eaten when young and tender. Other gourds, however, have bitter, stringy flesh and are largely considered inedible.

The difference between pumpkin and gourd classification also becomes fuzzy when we consider varieties like miniature pumpkins. Are these cultivars in the Cucurbita pepo species edible or solely for decoration? Turns out, you can eat them.

However, they are often sold alongside inedible varieties of C. pepo gourds. Purchasing these adorable miniature pumpkins for consumption is not advisable as decorative fruit may have been sprayed with poisons like shellac to preserve their beauty.

Bottom line, Cucurbita is a Latin word whose English translation means gourd. Thus, the term gourd can technically refer to any of the tendril-bearing members of the Cucurbitaceae family. In addition to pumpkins, squash and gourds, this also includes fruits and vegetables such as cucumbers, watermelon and cantaloupe.

If you’re more confused now than before, just remember this generality. We carve pumpkins, cook squash and decorate with gourds.