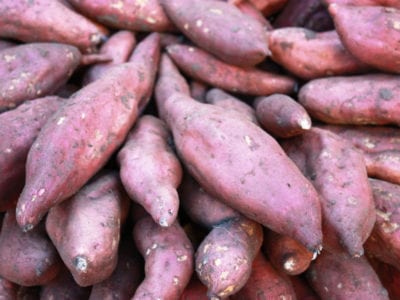 As mentioned, there are several pathogens that can cause storage rot of sweet potatoes, but the fungal diseases caused by Fusarium are the most common reasons for post-harvest losses. Fusarium surface rot and Fusarium root rot are caused by the fungi Fusarium.

Fusarium surface rot – Fusarium surface rot is common in sweet potatoes stored post-harvest. Surface rot may also afflict tubers that have been damaged by mechanical injury, nematodes, insects, or other pests, prior to harvest. The disease presents as brown, firm, dry lesions on the roots. These lesions stay fairly close to the surface of the root. As the tuber is stored, the tissue surrounding the lesion shrinks and dries, resulting in a hard, mummified tuber. Surface rot is most prevalent when tubers are mechanically harvested when the soil is cold and wet or overly dry.

Fusarium root rot – Fusarium root rot is a little more difficult to diagnose since it looks much like Fusarium surface rot. In fact, sometimes surface rot is a precursor to root rot. The lesions of root rot are round and mottled with light and dark concentric rings. Unlike surface rot, root rot extends deep into the center of the root, eventually affecting the entire root. The lesion is spongier and moister than healthy tissue. When root rot begins at the end of the tuber, it is called Fusarium end rot. As with surface rot, the infected tissue shrinks, dries, and mummifies during the course of storage, and the infection occurs through wounds or growth cracks.

Fusarium can reside in the soil for years. Both surface and root rot can spread to healthy stored roots if they are damaged by mechanical means or pests. To reduce the incidence of Fusarium disease, practice good sanitation and handle the roots with care to minimize injury. Control root-knot nematodes and other insects that can damage the skin of the sweet potatoes and only plant disease-free roots that have been treated with fungicide.

Rhizopus soft rot – Another common fungal disease, Rhizopus soft rot, is caused by the fungus Rhyzopus stolonifer, also called the bread mold fungus. The infection and resulting decay usually start at one or both ends of the root. Humid conditions foster this disease. Infected potatoes become soft and wet and rot within a few days. The sweet potatoes become covered with grayish/black fungal growth, an obvious sign of Rhizopus soft rot vs. other sweet potato rots. This rot also comes with an accompanying odor that attracts fruit flies.

As with Fusarium, spores can survive in crop debris and soil for an extended time and also infects roots through wounds. Roots are most susceptible to the disease post-harvest when the relative humidity is 75-85% and the longer the roots are stored. Again, handle the tubers with care to prevent injury that will act as a portal to disease. Cure the sweet potatoes before storing them and store the roots at 55-60 F. (13-16 C.).

Black rot – Other diseases may result in sweet potatoes rotting after a harvest. Black rot, caused by Ceratocystis fimbriata, not only causes rotting but gives the sweet potatoes a bitter flavor. Small, roundish, dark brown spots are the first signs of black rot. These spots then enlarge and change hue with visible fungal structures apparent. Roots may look healthy at harvest but rot post-harvest where spores are produced prodigiously and can rapidly infect an entire crate of tubers as well as everything that comes in contact with them.

Again, the pathogen survives in the soil in crop debris. The disease can be controlled by practicing crop rotation, disinfecting equipment, and proper curing. Propagate plants from healthy cuttings only.

Java black rot – In the southern regions of the United States, java black rot, caused by Diplodia gossypina, is one of the most destructive storage rots. Infected tissues become yellowed to reddish brown, turning black as the disease progresses. The decaying area is firm and moist. Infected roots often decay completely within a couple of weeks, then mummify and harden. This is yet another fungus that survives for years in soil or crop debris as well as on equipment from year to year.

As with the above fungal diseases, java black rot requires a wound for infection. Increased storage time and/or an increase in temperature foster the disease. Again, to control this disease, minimize injury to the sweet potatoes, apply a fungicide to harvested roots, cure the tubers properly, and store the potatoes at 55-60 F. (13-16 C.) with a relative humidity of 90%.

Bacterial soft rot, scurf, and charcoal rot are other post-harvest rots that can afflict sweet potatoes, although less commonly.

Printer Friendly Version
Read more about Sweet Potatoes
<PreviousNext>
Did you find this helpful? Share it with your friends!
FacebookTweetPinEmail
Related Articles
Newest Articles
You might also like…
Additional Help & Information