Eating Unripe Green Tomatoes May Actually Be Good For You 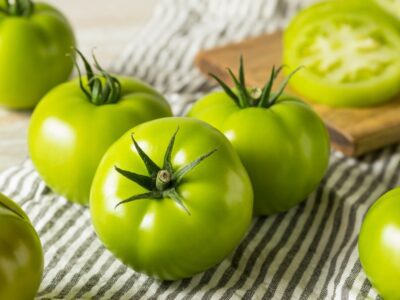 The History of Tomatoes

Tomatoes are one of most popular plants to grow in the home garden. Native to the Americas, the fruit of this member of the nightshade family was consumed by the Aztecs as far back as 700 AD. Yet when tomatoes were introduced to the old world, many Europeans feared the fruit was poisonous.

Today, we know tomatoes are not only safe to eat, but nutritious as well. Although most people think of tomatoes as red, this fruit can ripen to a variety of colors depending upon the variety. Some varieties, like Green Zebras and Green Moldavians, are green when fully ripe.

If you grow these varieties in your garden, you can distinguish them from unripe tomatoes by their color and firmness. Green varieties of tomatoes often have darker green vertical stripes or markings when fully ripe. Unripe tomatoes are generally pale green all over. Ripe tomatoes of any color will feel soft when pressed, while unripe ones are firm.

Is it Safe to Eat Green Tomatoes?

The answer lies in the quantity. As a defense mechanism, green tomatoes contain alkaloid compounds, such as solanine, atropine and tomatine. These compounds are at a higher concentration in green fruit than ripe ones. Along with a bitter taste, this discourages the fruit from being consumed before the seeds are fully mature and viable.

In small quantities, green tomatoes are safe to eat. Adult humans would need to consume 1.4 pounds (625 grams) of green tomatoes for these toxins to reach a lethal level. However, lesser amounts can cause digestive upset. While the tartness of unripe tomatoes is what gives fried green tomatoes their distinctive flavor, it’s best to eat them in limited amounts.

What to do with Green Tomatoes

If you live in a climate where fall frost routinely kills your tomato plants, you may be wondering what can be done with all the green tomatoes still on the vine when it’s time to pick off the garden. Tomatoes which reach the breaker or mature green stage can be picked and brought indoors to ripen or use.

To distinguish between green tomatoes which have started the ripening process and those which have not, look for a whitish star-shaped area on the bottom of the fruit. These unripe tomatoes will hold longer in this stage if stored at 55 degrees F. (13 C.). As the fruit begins to change to its mature color, it can be brought into the kitchen to finish ripening.

Are Green Tomatoes Good for You?

Research by a team of University of Iowa scientists have discovered tomatidine, an alkaloid compound found in the skin of green tomatoes, may have pharmacological properties. It’s believed this compound has the potential to build muscles and prevent muscle atrophy.

Muscle atrophy occurs naturally as people age, but also accompanies a variety of illnesses including cancer and heart failure. Currently, there are no approved medications to reverse atrophy and rebuild muscles. While this research seems promising, more is needed to determine the effect tomatidine has on human muscles and the toxicity level of this compound.

Printer Friendly Version
Read more about Tomatoes
<Previous
Did you find this helpful? Share it with your friends!
FacebookTweetPinEmail
Related Articles
Newest Articles
You might also like…
Additional Help & Information