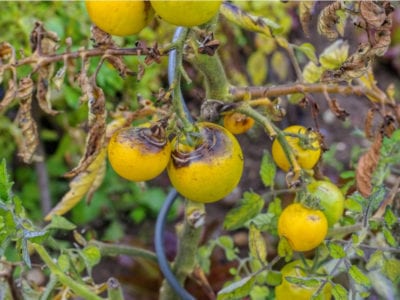 What is Late Blight of Tomato Plants?

Late blight of tomatoes is the result of Phytophthora infestans and is notorious as the cause of the Irish potato famine during the 1800’s. Although it shares some similarities, P. infestans is not a fungus nor is it a bacterium or a virus, but rather belongs to a class of organisms called protists. Sometimes referred to as water molds, protists thrive in humid, moist environs, produce spores and spread when water is on the plant’s foliage. They may afflict plants from spring to fall depending upon favorable weather conditions.

Tomato fruit affected by blight are first evidenced as brown to black lesions on the stem or petiole. Leaves have large brown/olive green/black blotches beginning at the margins. A fuzzy growth containing the spores of the pathogen begins to appear on the underside of the blotches or stem lesions. Tomato fruit affected by blight starts as firm, irregular brown spots becoming larger, black, and leathery until the fruit eventually rots.

In its earliest stages, late blight can be mistaken for other foliar diseases, such as Septoria leaf spot or early blight, but as the disease progresses there can be no mistaking it as late blight will decimate the tomato plant. If the plant appears to be extensively affected with late blight, it should be removed and burned, if possible. Don’t put the affected plant in the compost pile, as it will continue to spread infection.

At this time, there are no tomato varieties resistant to late blight. Late blight can also infect potato crops, so keep an eye on them as well.

Weather is a major factor as to if tomatoes will get late blight. A timely application of fungicide may slow the disease long enough to get a tomato harvest. Crop rotation will also retard the spread of the disease.

The question, “Are blight infected tomatoes edible?” cannot be answered by a simple yes or no. It really depends on how infected the fruit is and your own personal standards. If the plant itself seems to be infected, but the fruit as yet shows no signs, the fruit is safe to eat. Be sure to wash it well with soap and water or dip it in a 10 percent bleach solution (1 part bleach to 9 parts water) and then wash. It is possible that the fruit has already been contaminated and is carrying spores on the surface; it just hasn’t progressed to a visual yet, especially if the weather has been wet.

If the tomato appears to have lesions, you may choose to cut these out, wash the remainder of the fruit and use it. Or, if you are me, you may decide to follow the old adage “when in doubt, throw it out.” While late blight has not been shown to cause illness, fruit that is afflicted may be harboring other pathogens that very well may make you sick.

If the plant appears to be in the throes of the disease, but there are multitudes of green, seemingly unaffected green fruit, you may be wondering if you can ripen tomatoes with blight. Yes, you can try. Be aware, though, that the spores are likely already on the fruit and may just rot the tomatoes. Try washing well as above and drying the fruit before letting it ripen.