Do Tomatoes Ripen From The Inside Out? 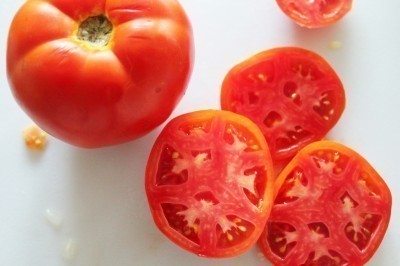 “Do tomatoes ripen from the inside out?” This was a question sent to us by a reader and at first, we were perplexed. First of all, none of us had ever heard this particular fact and, secondly, how odd if it was true. One quick search of the Internet showed that this was indeed something that many people believed, but the question still remained — is it true? Read on to learn more.

In order to find the answer to the question as to whether tomatoes ripen from inside out, we scoured the websites of the horticultural departments at many of the universities across the United States. At first, we could not find a single mention of this particular ripening process and, as such, assumed that this could not be true.

That being said, after a little more digging, we have, in fact, found mention of this “inside-out” ripening of tomatoes from more than a handful of experts. According to these resources, most tomatoes ripen from inside out with the center of the tomato normally appearing riper than the skin. In other words, if you cut a mature, light green tomato in half, you should see it is pink in the center.

But to further support this, we are going to provide additional facts about how tomatoes ripen.

Tomato fruits go through several stages of development as they mature. When a tomato has reached full size (called mature green), pigment changes occur – causing the green to fade in color before changing to the appropriate varietal hue such as red, pink, yellow, etc.

It’s true that you cannot force a tomato to turn red until it has reached a certain maturity and, often, the variety determines how long it takes to reach this mature green stage. In addition to variety, both the ripening and color development in tomatoes is determined by temperature and the presence of ethylene.

Tomatoes produce substances that help them turn color. However, this will only take place when temperatures fall between 50 F. and 85 F. (10 C. and 29 C.) Any cooler and the ripening of tomatoes slows significantly. Any warmer and the ripening process may completely stop.

Ethylene is a gas that is also produced by a tomato to help it ripen. When the tomato reaches the proper green mature stage, it starts to produce ethylene and the ripening begins.

So now we know that, yes, tomatoes ripen from the inside out. But there are also other factors that affect when and how the ripening of tomatoes occurs.